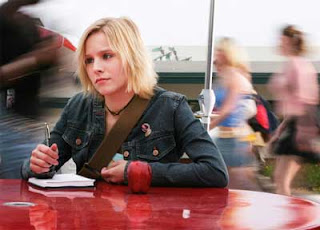 She might be tiny, and look more like a homecoming queen/cheerleader than a hard boiled private eye, but Veronica Mars (Kristen Bell) is sharp as a tack with a tongue to match. She's fearless, fiercely intelligent, and lets be honest, cute as a button.

Meet Veronica Mars. Your typical high school student and private eye. A year ago, Veronica's best fried Lilly was murdered. Her father Keith, then the town sheriff, accused Lilly's billionaire father of the murder. When another man confessed, Keith was booted from office. All of Veronica's friends stopped talking to her, and her mother left town. But as Veronica starts her junior year of high school, it becomes clear that nothing about her life is what it seems.


For a mere three seasons, this series re-wrote the book on what a private eye show can be.  Balancing between cases and school, Veronica Mars walked that tightrope, much like Buffy, between teen angst and genre fiction.  The first two seasons hung on a main mystery, her friend's murder, a bus crash, while the third takes on a more "campus problem of the week" tone.  The third season lost me a bit, much like Buffy's first freshman year, but the first two seasons are rock solid.

Joining Kristen Bell for her adventures are best friends Wallace (Percy Daggs III) and Mac (Tina Majorino), each with their own skill set, be it handiness with computers or the actual ability to talk to the jocks without getting a wedgie.  Should she need muscle, there is always bad boy biker Weevil Navarro (Francis Capra) who seems to have a soft spot for Veronica.  And what's a good show without a foil/love interest?  While I personally didn't care for Logan at all, it's of no fault to Jason Dohring.  He was dealt a tough hand, going from snotty dickish rich kid to Veronica's main squeeze, but he played it as best he could. And when her loverboy wasn't a big enough shoulder to lean on, her father, disgraced sheriff Keith Mars (the perfectly cast Enrico Colantoni) was always there, and always entertaining. 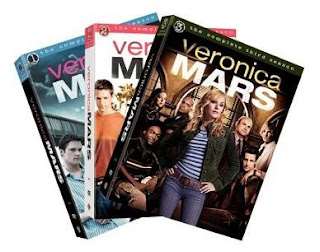 Sadly, like all really good shows of the past few years, Veronica Mars was not a ratings juggernaut, and cancelled before it's fourth season.  If the following preview is any indication, it would have been a welcome "skip" of the college years and onto the FBI.  Rumors constantly swirl about either a full length movie or even a comic series, but I'd be surprised if either ever saw the light of day.  It saddens me a tiny bit, but at least I've a few DVD box sets to watch while I dry my eyes.  If you have a Netflix account, you can stream the episodes and cry along with me.