I was twelve years old, the age when they say you really begin to develop your own style, tastes and attitudes. Where who you are going to be begins to peak through into your personality.

God I hope not.

I didn't have a damn clue at that age, and to be honest, I'm not sure any twelve year old knows anything worth knowing.

Case in point.  When I was that age, this was a show I actually watched, and frighteningly enough, it was my first television experience with a police show that I can remember.  I wish I could say it was something cool, like Hill Street Blues, 21 Jump Street, Crime Story, or even something that had become as culturally relevant as Miami Vice.  But nope.  Not me.

The first cop show I vividly remember watching was.... 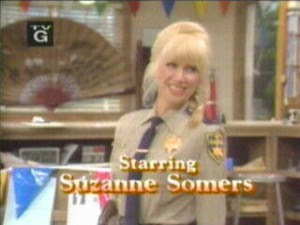 That's right.  She's the Sheriff.  I'm not sure why I bothered to watch this absolute piece of crap.  It could have been because I absolutely adored Three's Company.  And I did recognize George Wyner from Spaceballs.

But that doesn't excuse it one little bit.  For those of you thankfully not familiar with this claptrap, She's the Sheriff starred Suzanne Somers, she of the Thigh Master fame, as the wife of a small town sheriff.  When he dies, she of course takes over for him.  Isn't that how it always works?  I cannot remember much more than that, and any attempt to remember an actual story has thankfully been blocked out, much like an alcoholics worst transgressions.   Is it proper to equate watching this show with alcoholism?  Sadly, yes, and if there were a twelve step program to account for my lack of judgement, I would join in a heartbeat.

She's the Sheriff has never been released on DVD.  And unless the gates of hell burst open it should stay that way.

To atone for the terrible judgement I showed back in 1987, I'm going over to Netflix and watch some true lady cops from the 80's. 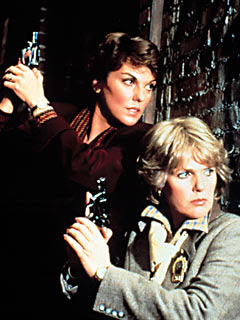