For those of you girls out there who still believe Bella Swan to be an acceptable role model, I ask, no I plead for you to read Brian Michael Bendis and Alex Maleev's Scarlet from Icon.  Keep in mind, I don't hope that after finishing the first few issues you will somehow turn into a sexy female version of Charles Bronson. That would frighten me. I just pray that you will stop debating between an imaginary sexy vampire and a smoldering werewolf.  That frightens me more. 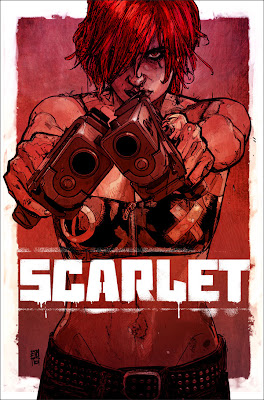 Issue One, which re-teams the Eisner Award winning duo (Daredevil) of Brian Michael Bendis and Alex Maleev, starts off a little shaky.  It's got a rock solid revenge premise, but Scarlet herself talks directly to the reader, and usually fourth wall breaking is a gimmick that runs dry within an issue.  Honestly, it gets on my nerves a bit, but is overshadowed by Bendis's sharp, witty dialogue and a very unique take on an origin story told in a very compressed three pages.    Now here's the meat of the book.  Scarlet is kind of a loser, hanging out in public squares with her hipster boyfriend doing nothing.  When a few cops try to arrest them for drugs (and cop a feel), they make the mistake of bolting.  The officers catch up to them, and in a shocking moment, kill her boyfriend and knock her unconscious.  When she wakes up in a hospital, the story has been sold that her man was a drug kingpin, and the cops who murdered him are heroes.  Scarlet decides to do something with her life, mostly dealing with revenge.

The story wasn't selling me yet, but I enjoy it when these two guys work together, so giving them a chance on a second issue wasn't a concern. 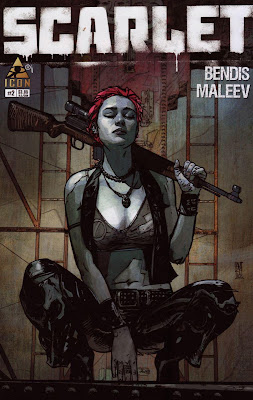 By the time I was finished with Issue Two, it was decided I would follow them wherever they went with the story.  The narration continues with it's usual tricks, but by now I was used to it and it wasn't quite as jarring.  Scarlet herself becomes a more rounded character, and we see the possibilities she has beyond the Death Wish character she could become.  Don't get me wrong, there is some vengeance handed out, but after,she realizes there has to be more to her quest beyond basic revenge.  As the final page closes out, and she begins to talk of revolution, I could practically hear Rage Against the Machine in the background.  Her message was clear.  Stop being so fucking passive and do something.

I have no idea if this has been optioned for a film, but it should be.  It has the chance to be a fairly polarizing story, and on the big screen it could make a lot of people talk, as well as provide an excellent role for some lucky actress.  Until then, I'm going to continue to enjoy it on a monthly (fingers crossed) basis.  There is nothing else like in on the market today.  Despite it's $3.95 price tag, a Bendis title is always worth it, thanks to it's content and consistently entertaining letters column.

As I sat down to write this, my current shipment from DCBS arrived, and there in all it's glory was Issue Three.  I'll be sure to let you know how that was as well. 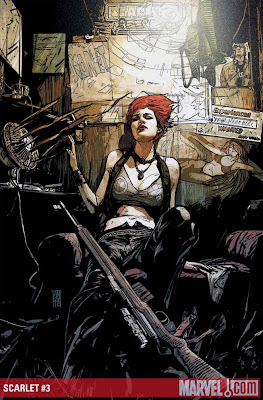