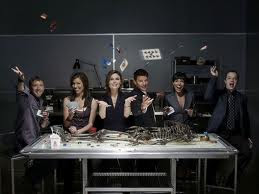 For once, I've found something where I like the show better than the books.

To be fair to author Kathy Reichs, I've only tried to read one of the novels, but after five stops and starts I just gave up.  The written Temperance Brennan, forensic anthropologist extraordinaire, just wasn't as compelling as the "Bones" that Emily Deschanel created on the show, well, Bones.


Over the past five seasons (haven't watched six) Deschanel has brought what would be considered an unbearable woman to immense likability.  I'm not sure if I could deal with her all-knowing-detachment-from-actual-humans on a daily basis like Special Agent Seely Booth, but on television, she's an absolute delight to watch.  She is unbelievably intelligent, capable, and a truly one of a kind character.

And she's not the only one.  The supporting cast is equally as excellent.

I gave the show a shot because of David Boreanaz.  I didn't exactly care for his self-loathing on Buffy, but was surprised by how I enjoyed the exact same character once he got his own show Angel.  And Bones uses his strengths, mostly rugged good looks and physical nature, perfectly.  He's a good emotional balance to the logical Bones, kind of like a modern day Captain Kirk and Spock.

But the show isn't all about them.  Joining Bones and Seely are the "squints," the team of scientists that aide them on their adventures.

There are the usual nerdy scientist guys, mostly rich-boy Dr. Jack Hodgins (TJ Thyne) and eager-beaver Zack Addy (Eric Millegan), but also some very capable, very beautiful female scientists.  Angela Montenegro (Michaela Conlin) might not be a doctor like the rest of the team (she's an artist) but her skills at facial reconstruction are without peer.  And leading the whole team is a former flame of Booth, Dr. Camille Saroyan (Tamara Taylor).  I'm not sure if I need to mention their looks as well as their skill, but far too often characters of this nature are usually one dimensional, either occasional eye candy or the tech talker.  With Bones, they are both, as well as well rounded characters who occasionally get their own spotlight.  They might not be as important as the leads, or the cases, but that doesn't make their screen time any less interesting.

If you are not watching this show, you should be.  There are five seasons available on DVD, and they can be streamed on Netflix.  You have no excuse.