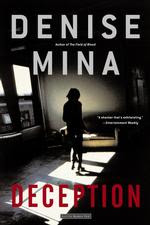 How well do you know your significant other.  I'm sure you have his/her birthday memorized, can cook or order his/her favorite meal, maybe even name a favorite movie and color.  But when the day comes to an end, and heads hit the pillow, do you really know what they are thinking?  Do you want to?  It's much easier to think they are dreaming of nothing but loving you and the life you've built than an alternative.

Maybe it's not you they really love.  Maybe they secretly loathe you.  Perhaps worth.

Reading Deception by Denise Mina, I couldn't help but be reminded of Eye's Wide Shut, Stanley Kubrick's last film.  There might not be any elaborate sex parties or midnight romps through New York City, but the monologue that Nicole Kidman delivered at the films beginning, where she talks of leaving her entire life behind if that soldier had just asked her to, really sunk in as I turned every page.

Lachlan Harriot had a good life.  He graduated with a medical degree, but chose instead to be a stay at home dad for his infant daughter while his wife, a psychiatrist, worked.  To most, it would seem like a young family.  Only Susie grew distant, spending more of her time at work and locked away in her office.  Communication suffered, and Lachlan felt his wife slipping away.

Then she was convicted of murder.

Andrew Gow was a serial killer; an admitted one.    But despite his initial confession, Gow claimed innocence.  Pending an appeal he was set free, and soon found dead along with his wife.  He was under Susie's care, and it soon becomes apparent to Lachlan that their relationship might have been more.

Deception is written as Lachlan's journal, as he digs through his wife's hidden life.  He enters her previously off limits house office/space, and obsessively searches through the files, the papers, even through her computer, hoping to find anything that will come to her defense, no matter how much she protests.  And why does she object to him helping her out.  What secrets does she hide?  What could be so horrible that she wouldn't want him to read it?

Lachlan is an amazing character, perhaps one of the best unreliable narrators I've ever read. Mina's florid prose pushes him through every emotion a human can feel in this situation.  The guilt at maybe not loving his wife enough, especially when he strays from the marriage, is real and heartfelt, as well as his rage at not being fully included in his wife's life.  Such emotions can go back and forth numerous times each chapter, and it was easy to go along for the ride.  It's an intense experience, and impossible to put down until the questions are answered.  By the end of the book I needed to know just as much as Lachlan did.

A fantastic book that can alternate between unbelievable sadness and moments of black  humor with ease.  Mina is an author I need to become more acquainted with.
Posted by Dan Fleming at 10:40 AM