New Comics Wednesday Week 46 - A Sickness in the Family 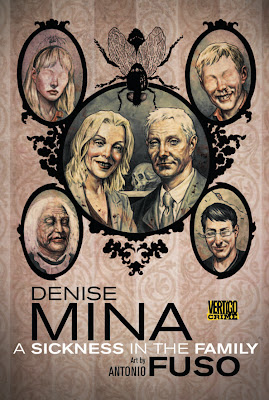 I've been a big fan of the Vertigo Crime books since the moment the first one arrived on my doorstep.  While the stories and/or art might not have always been as good as I hoped, they at least maintained a solid standard of quality.  So far, I haven't regretted a single purchase.

However, there are also inherent problems with the format.  The stories have all been around the same length.  Might not be considered a problem, but there have been a few tales I wished were fifty pages longer.  There is also the imprint's title, Vertigo Crime.  So when stories like today's graphic novel, A Sickness In The Family, bend more towards the supernatural, you know they will have to come back around to crime sooner or later.

And that is unfortunate.

Meet the Ushers.  The parents, Ted and biddy. Grandma Martha.  The three kids, Willam, Amy and Sam.  Just a normal family gathered around the dinner table.


Until they start dying.  One by one.  Each of most decidedly unnatural causes.


Is there a curse on their house, as a recently unearthed history of witchcraft in the area would suggest?  Or has one of the Ushers declared open season on the rest?


As shameful secrets and bitter resentments boil to the surface, it becomes clear that more than one Usher harbors a motive for killing off the others.  Bu in the end, the truth turns out to be far more shocking than anyone in this ill-fated family could have imagined.

Denise Mina's tale of a family spiraling down is as good as any "ghost" story you are going to read.  Characters are well developed, with long standing grudges, dysfunction, and feelings hidden just beneath the surface.  Tension is constantly in the room, and when bruises start appearing, and bodies start dropping, it's only a matter of time before authorities are involved. But does that make what has happened murder?

Had this been published outside of the crime imprint, I would have been convinced it was indeed an angry spirit.  But knowledge that honest to goodness human depravity was behind the crimes and not poltergeists doesn't make the story any less effective.  It was creepy, malevolent, and very believable.

Mina's story was aided by the art of Antonio Fuso.  His characters were easily identifiable, and the storytelling strong.  Another downside to the format is the lack of color, something Fuso's art would have benefited from, as evidenced from his Punisher Noir story from Marvel.  His art isn't as black heavy (but the grey are nice) as other artists, and a story like this really needs that "mood."

Overall, this is a solid book, and it's made me reconsider reading Mina's previous comic work, the supernaturally bent Hellblazer. 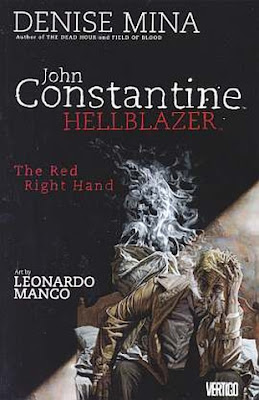