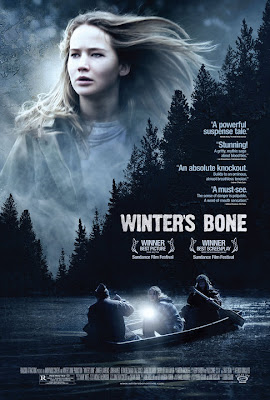 Some movies are so got you just don't want to talk about them right away.  The impact needs time to disperse, soak in, let the bruise fade before you are ready to verbalize.  Winter's Bone had that effect on me, and much like Ree Dolly, I'm left a little stricken by everything I saw.  I'm not sure what I have to say yet, other than I'm sure it's going to be one of my favorite movies of the year.

Rarely have I seen anything so raw and brutal with such little violence.  Much credit goes to the screenwriters Debra Granik (who also directed) and Anne Rosellini for an amazing, efficient adaptation of Daniel Woodrell's novel.  So much is understood without being spoken, and all the actors do an amazing job of portraying their thoughts with just looks and mumbles.  You think La Cosa Nostra has a vow of silence?  You haven't seen anything.  The folks that inhabit this movie are as tight lipped as they come, to family, friends, and especially the authorities.

I'm going to let my thoughts simmer a bit more, but in the meantime I'm going to immerse myself in the discs special features which include a commentary, making of, and some extra scenes.

I will say this though, Jennifer Lawrence better get a damn Oscar nomination.