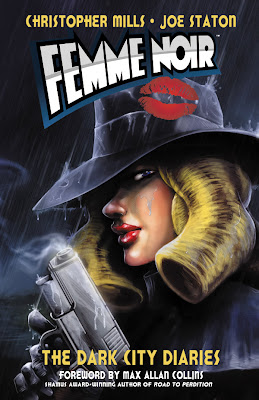 This is Port Nocturne.  The Dark City.  Where the acrid scent of gunpowder lingers in the air like cheap perfume...where every black alley comes to a dead end...where enemy and ally are but temporary distinctions...and justice...is blond.


It's hard to describe the book that Christopher Mills and Joe Staton have created.  Should I be pressed to describe Femme Noir I'd simply have to say it's a combination of Chandler, Will Eisner, Dick Tracy, Mad Science Fiction, and Pulp Magazines all tossed into a blender with a gallon of the blackest ink.  Take that concoction and hand it to a smoking blond in a trench coat and hope she doesn't kick your ass.  That is Femme Noir.

Open up the collection, The Dark City Diaries, and by the end of the first short story, Night in the Life, you will know if this book is for you.  In five short pages you meet:

Ghastly, a criminal who looks like the Crypt Keeper
Thom Katt, a cat burglar hoping to make out with the Star of Rhodesia diamond
Jeepers Jacoby, stool pigeon
The diabolical Damian D'Eath and his homicidal homunculi
The Douglas Street Boys
Gorilla with a gun, Simeon Link
and Underworld killer Gator DeNoux

Each character and situation receives barely more than a panel, but the situations and character design create the world in which Femme Noir inhabits.  Each interaction is steeped in history and a sense that it's all just part of a day for our heroine.  Five pages.  That's all it took to sell me on the concept.

Blonde Justice, in which a writer tries to deduce the identity of the Femme Noir.  Is she Mob daughter Vanessa DeMillo, nightclub singer Dahlia Blue, or ace reporter Laurel Lye?  The case is strong for each, but don't expect to come away with answers.

Come aboard the luxury boat Little Miss Fortune, where Mister Diamond and his muscle Mr. Klubb have created a gamblers paradise three miles of the coast of Port Nocturne.  Away from the prying eyes of the law, feel free to gamble your problems away.  Just make sure you can pay, or you may end up drawing the Dead Man's Hand.


Society made him a criminal!  Science made him a monster!  Vic Tober, robot mobster, is the Killer in Steel!  Robot mobster.  Do I really need to sell that story to you?  How about this.  There is a bar called The Alibi.

In Concrete Jungle, members of the elite Port Nocturne Adventurers Society are being hunted and killed.  What, if any, is their connection to the mysterious jungle girl Okona?  Professor Mycroft Powell might have the answers, and they might save his life.  Maybe he shouldn't have stolen that mysterious orb from Monster Island?

And lastly, meet Private Eye Red "Rusty" Nales as he teams up with "the blonde" to solve the case of The Dingus.


In today's world of decompressed storytelling, where stories are stretched out to accommodate the inevitable collection, it's refreshing and welcome to see tales where so much can happen in a shorter page count.  It doesn't matter if the chapters are five pages or thirty, you'll get your money worth here.

Absolutely anything can happen in Port Nocturne, and I'm thrilled to to have such capable tor guides as these. Mills has crafted some genre busting tales that are soaked in noir traditions, but allow them to be tweaked into something more,  And Staton's art has never looked better.  Dark, shadowy, and with a noticeable tip of the hat to Will Eisner, Joe's Port Nocturne is a fully developed city, with something interesting at every street corner.

Besides all his comic work, Chris also writes the DVD Late Show blog, home of some fantastic movie reviews.
Posted by Dan Fleming at 10:46 AM