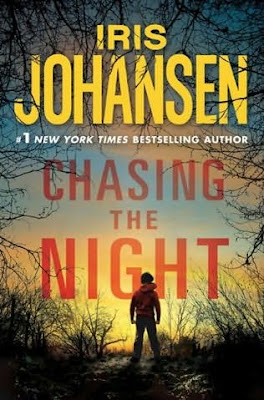 Even Duncan is a forensic sculptor whose mission in life is to bring closure to the families whose children have gone missing.  She is able to piece together the bone fragments and re-create their faces. She is driven, she is intuitive, and she is haunted because her own daughter, Bonnie, was stolen from her so many years before.  Bonnie has never been found.


Catherine Ling is a CIA agent who is as tormented as Eve.  Her young son, Luke, was taken from her when he was only two years old, as an act of revenge against Catherine.  For nine years, she hasn't known if Luke is alive or dead.  But she knows exactly who took him...


If Eve can re-create Luke's face the way he would look now, at age eleven, Catherine has a chance at finding him.  If Catherine gets closer to the truth, she may put Eve, and all those she loves, in the path of evil and vengeance.  If Luke is actually alive, can he still be the son Catherine lost?

Before I start in on today's book, Chasing the Night, let me give you a little background info on Iris Johansen.  She's been writing for over thirty years, both in the romance and mystery genre.  Over sixty books have been published in that time, including ten starring Even Duncan and Joe Quinn.  Obviously, she is prolific as well as popular.

That being said, Chasing the Night is a terrible thriller/mystery.

Eve Duncan and Joe Quinn have the potential to be very interesting characters.  She is a highly skilled forensic sculptor and Joe is pretty much a supercop.  As a couple, they are a force to be reckoned with.  Add to the mix, black op spy Catherine Ling and child prodigy Kelly, and a few mercenaries, and the potential is certainly there.

But this book was flat out boring.

Characters talked at each other, not too each other.  Conversation felt flat and repetitive.  How often do people really tell each other exactly what they are thinking? And do it over and over and over again.  I get the point.  Eve is talented.  Joe loves her to death.  Catherine is more talented.  Blah blah blah.

And listen to this speech from the villain.

"Duncan taught you that.  How annoying.  It modifies my efforts in increasing your pain.  I'm going to remember that when I have her at my disposal."  He paused.  "I'll be thinking about you while Duncan is doing her wizardry.  I'll be imagining every expression on your face, every bit of agony that you're feeling.  Is it really your little Luke?  Did the bullet hurt him before he died?  I wish I could devote more time and concentration, but I've had to initiate the prologue to my farewell party, and it's requiring my attention."


You can practically hear him twirling his mustache.

The first two thirds of the book was full of stuff like this, and it took me well over two weeks of reading to get that far.  In that time I could have read Ulysses or Infinite Jest, but even those books were easier to get through than this.  Don't get me wrong, the book wasn't as complicated or dense as those novels, but after five pages or so I just found my mind wandering, completely uninterested on what was on the page.

I could go on and on about what I didn't like about the book, but what's the point. Unlike Iris Johansen, I'm not going to beat a point to death.
Posted by Dan Fleming at 10:42 AM