To the Mattresses Week 44 - Jodie Foster vs. Everyone

Why is it that I have such a hard time believing most actresses in "tough as nails" roles these days. 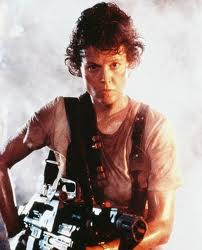 It wasn't always the case. I adore the Alien movies, and Sigourney Weaver can kick the hell out of most of the men in those films, especially that puss Bill Paxton.  Even the grunt Pvt. Vasquez made my adolescent self shrivel up in the bathing suit area.  But that was 20 years ago.  I need someone more current. 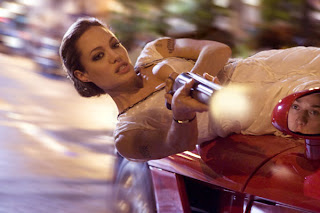 Which brings me to Angelina Jolie.  Okay.  Her I can believe.  She nails her stunts, and in movies such as Wanted (I haven't seen Salt) and Mr. and Mrs. Smith she whoops ass.  However, thanks to her role in Girl Interrupted, I also believe that she used to be batshit crazy, and that goes a long way towards my believing she is badass.  That and her admitted love of knives and Billy Bob Thornton. 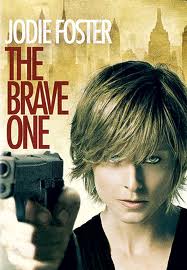 As I run down most of the films I've enjoyed with a hard ass leading lady, the one trait that continually comes to the forefront is mastery of their craft.  Jodie Foster immediately springs to mind.  Her attitude was shown at the tender age of thirteen when she played a prostitute in Taxi Driver.  She went toe to toe with DeNiro and Keitel, so that gets her some props in my book.  It was almost twenty years later when she went on to win the Academy Award as Clarice Starling, an FBI agent holding her own against Hannibal Lecter in Silence of the Lambs.  Since then she's been an overprotective mother in both Panic Room and Flightplan,  a woman with an agenda in Inside Man, and the female Charles Bronson in The Brave One. 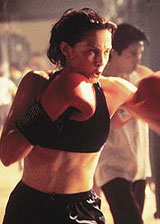 So she kicks ass.  She has also been around for years.  Who is going to unseat her and Jolie?  Ashley Judd took her shot, and despite some success (Kiss the Girls), the less said about films like Double Jeopardy, Eye of the Beholder, and High Crimes the better.  So I'm not sure if I should blame her or her agent, because those roles did her no favors other than a paycheck. 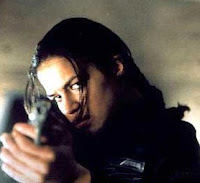 So based on these examples, I obviously can believe that some woman can carry the tough girl act.  But for every Sigourney and Angelina there is a Michelle Rodriguez, who has built a career out of playing the woman with a chip on her shoulder.  The one difference between her and the previous two actresses is they can actually act.  Rodriguez is like a robot who has only a default setting of "hardcore" and loses all believability with me.  She is incapable, mostly through typecasting, of expressing any other emotion, so her bravado seems more of an act.  She doesn't speak softly, but carries the big stick, and therefore is a caricature.  I'm not going to count her. 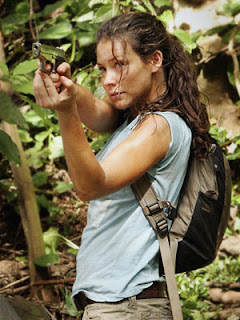 Evangeline Lilly, who was on Lost with Rodriguez, had some of the bad girl aspects to her.  She had the attitude, the cunning, definitely the charm, but physically it was hard to believe she could punch a man and not break every bone in her hand.  The woman is tiny and thin, so while I had no problem with her firing a gun, I took issue with her general ass kicking.

Uma Thurman had a shot thanks to Kill Bill, but since then she seems to have hung up the yellow jumpsuit.  Too bad.  She could have been awesome. Next.
Sadly, most of today's action heroines come not from the crime genre, but from sci-fi.  Resident Evil has Milla, Kate Beckinsale in Underworld, Carrie-Anne Moss in The Matrix, and Buffy from Buffy the Vampire Slayer.  Television has a few thanks to shows such as Alias, The Shield, and Undercovers, but for modern day movies I'm drawing a blank.
Help me out. Who has the ability to be the next Pam Grier? 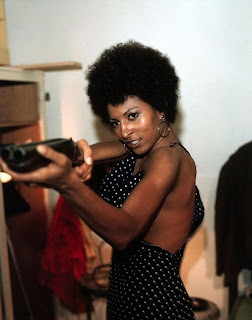