Who want's to see some girl on girl action? 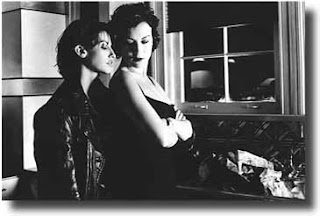 There.  That's all you are going to get, because it would be a downright shame to distill this excellent neo-noir down to "that lesbian crime flick by the Matrix people."  Sure, the lesbian angle is probably what sold a pair of first time directors to the studio, but once you look past the sex, the Wachowski's really made a film that plays with the archetype of a noir and made it their own. 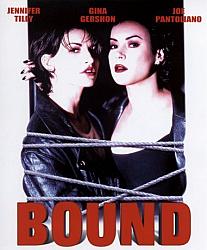 Corky is a tough ex-con working in an apartment building as a plumber.  Corky meets Violet, falls in love, and decides to steal two million dollars from Violet's mobster boyfriend Caesar.  Nothing works out as planned and things go terrible wrong.
From that paragraph, it doesn't sound all that different from a hundred other crime flicks.  However, since Corky is a girl, played with a perfect amount of toughness and sexiness by Gina Gershon, complications are going to arise.  What I noticed most about this plot, is that since Corky and Violet are both women, the mobsters don't really notice them all that much.  Had Corky been a strapping young man, you can bet your ass that Caesar would have taken a few more precautionary measures.  But that's our weakness as men.  We don't always find women threatening, and more often than not we don't consider them sexual rivals.  I'm sorry, but Gina Gershon should be considered a rival for just about any species.
The rest of the cast is filled with excellent character actors, mainly Joe Pantoliano.  Can anyone play sleaze as well as him?  Even pre-Law & Order Christopher Meloni gets in on the act.  But the real challenging role in this flick belonged to Jennifer Tilly.  She's a solid actress, even award nominated, but she's got a voice that you can either love or hate.  Me, I'm perfectly fine with it, and her, so it wasn't a problem.  For others, she might just rub you the wrong way.  But as Violet, the dissatisfied mob moll, she absolutely nailed it.
Despite all the acting talent on display, the real stars of the film are the Wachowskis, directing their first feature film.  Shot on a modest budget of  4.5 million, they use some excellent shots to make the most of their screenplay.  Who can forget the two million dollars hanging from clothesline throughout the apartment, or the long, slow camera movements?  Cinematographer Bill Pope certainly earned his money.
And speaking of which, how did they go from this to The Matrix?  That was a hell of a crime flick guys, heres 100 million dollars to go make a sci-fi Christ allegory action flick.  Hopefully, after the trilogy and Speed Racer, they got the need for spectacle out of there system and will go back to something this small and tense.
Easily, along with The Last Seduction, Red Rock West, and A Simple Plan, one of the best neo-noirs of the 90s.
Posted by Dan Fleming at 10:29 AM