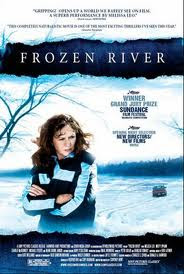 Melisa Leo, where did you go?  Sure, you did some television between Homicide and now (Veronica Mars, Law & Order, The L Word) and did some time in quality flicks like 21 Grams, and The Three Burials of Melquaides Estrada, but nothing like the quality you showed as Sgt. Kay Howard, the ball-busting lady who didn't take any hell from the mostly male squad room.  You wore those ties with pride, and there wasn't anyone cheering against you.  So it's good to see you back in something showcasing your talent.

Frozen River, like last Winter's Bone, is another one of those quality independent films that is far more concerned with story, acting, and quality, than your typical Hollywood fare.  It's easy to brand the big studios as bad guys, only after your hard earned dollars.  But when tiny boutique studios release films this excellent, well, the reputation is well deserved.

But you didn't come here to listen to me bitch about vapid summer blockbusters and their inferiority to the independent darlings.

Frozen River is simply a spectacular film, with an engrossing lead character as you are going to find.  The aforementioned Melissa Leo reaped a metric ton of praise (Oscar nomination, Independent Spirit Award) for her portrayal of  Ray Eddy.  From her opening, certainly unglamorous shot, to the last seconds of film, she IS a mother who will do anything for her children, even if it means smuggling illegals across the frozen waters of the St. Lawrence River between upstate New York and Canada.  As her plans begin to fall apart, and desperation sets in, you cannot help but feel terrible for her and her burdens.

But don't, not even for a second, think this show belongs to her and her alone.  A mesmerizing performance can only take a film so far.  The contributions of writer/director Courtney Hunt cannot be ignored, and thankfully they were not.  Her Oscar nominated screenplay is solid, honest, and believable.  What could have been a Op-Ed soapbox maintains it's focus on the story and the people within.  An opening scene shows Ray purchasing $7.75 in gas, and anyone ever hard up for money knows just what that feels like.  It was a small moment, but from there I was hooked.  Her direction, while hardly flashy, was economic and sparse, again choosing to concentrate on the parts of the story that mattered, especially the tiny details and some beautiful winter scenery.  Hard to believe it was her debut film.

Supporting turns from newcomer Misty Upham as Lila Littlewolf,Ray Eddy's partner in crime, and veteran character actor Michael O'Keefe as Trooper Finnerty, round out a good cast.  They might not have had the biggest and best roles, but they were memorable, especially Misty.  Her deeply wounded Lila said a lot without talking much.

This taut, suspenseful film delivers an emotionally charges, and for me, completely surprising ending.  It left me thinking for a few hours, and that's the most I can ask of a movie.  Frozen River deserves a bigger audience.