Time to dig in and finsih scripting the new graphic novel.

It started with Streets of Fire, the 80's Walter Hill film starring Michael Pare.  Both Matt and I love it. He had recently purchased the DVD, and I made him lend it to me within days.  As a child, I watched Eddie and the Cruisers endlessly.  When I first saw SOF, I was hooked.  A crime film with Michael Pare!  With music and Rick Moranis.  Solid gold.  My day was cancelled whenever it was on HBO.

So Matt and I decided we needed to write something we'd enjoy just as much.  Within days we had the beats.  I took over scripting, while Matt added flourishes to the dialogue.  Then the bastard went and moved.  The story went to the back burner. But the story won't leave my brain alone, and lately it's been quite a pest. Dialogue, images, they keep popping in.

We got the band back together.

With co-conspirators Matt Constantine and Geoff Mosse, we have begun working up a proposal to send here, there and everywhere.  I've worked with Geoff before.  One day, the graphic novel we created might be finished (all on my shoulders, as I just can't leave well enough alone, and am always finding things to add).  But his art has always amazed me.  Custon made for stories such as this.

So I'm getting back to work on fleshing out the 180 page script.   I'll leave you with a preview of this first page. 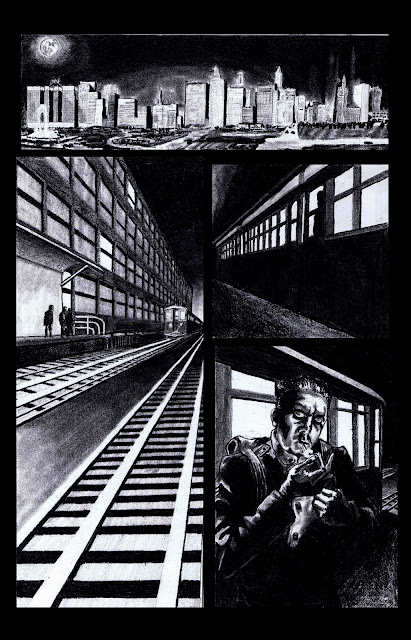