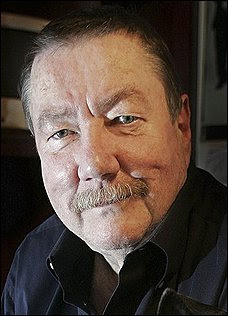 Robert B. Parker, 77, a popular and prolific author of hard-boiled American crime fiction, best known for the 37-book Spenser series which became an ABC television show in the 1980s, died Jan. 18, at his writing desk at home in Cambridge, Mass. A cause of death was not immediately known, but his longtime agent, Helen Brann, said it appeared to have been a heart attack.


Mr. Parker helped revive the detective fiction genre with his wise-cracking, street-smart and surprisingly literate Boston private-eye Spenser (no first name and with an "s" not a "c"). The character -- an ex-boxer and ex-state policeman -- is also a gourmet cook who grapples with his complex relationships with a witty female companion, an African American alter ego and a foster son. Named for Edmund Spenser, Shakespeare's contemporary, the character and series became a favorite of the literati who enjoyed crisp, witty prose.

Mr. Parker's work was notable for its quick pace, evocative descriptions, sharp dialogue and concentration upon themes that included the troubled status of adolescents, and of women in contemporary society. His protagonists, however, were tough guys, prone to violence, who nevertheless were true to a moral code as they protected a lesbian writer in "Looking for Rachel Wallace" (1980), chased after international terrorists in "The Judas Goat" (1983) and investigated drug smuggling in "Pale Kings and Princes" (1987) and "Pastime" (1991).

Mr. Parker wrote 65 books in 37 years, and was among the top 10 best-selling authors in the world, Brann said, with 6 to 8 million books sold. He was also the 1976 winner of the Mystery Writers of America's Edgar Allan Poe Award, its 2002 Grand Master Award and Mystery Ink's 2007 Gumshoe Award for Lifetime Achievement.

In addition to the "Spenser: For Hire" television series, which starred the late Robert Urich, Mr. Parker's Jesse Stone novels became CBS television movies starring Tom Selleck starting in 2005. "Appaloosa," his 2005 Western, was made into a 2008 movie directed by and starring Ed Harris.

A third fictional private-eye series, Sunny Randall, was created at the request of Academy Award-winning actress Helen Hunt, who asked Mr. Parker to write a novel with a female investigator. The first book did not become a feature film, but it was another bestseller

His prodigious output was the result of a disciplined work ethic: He wrote five pages per day, five days a week, 50 weeks per year.


"I started writing the Jesse Stone novels because I realized that at this point in my career it takes me three to four months to write a Spenser novel and as a result I have a lot of time on my hands," he told Bookreporter.com in 2000. His next book, "Split Image," a Jesse Stone book, comes out next month, and he has turned in several books that have not yet been published, including some in the Spenser series, Brann said.

Robert Brown Parker was born Sept. 17, 1932, in Springfield, Mass., and graduated in 1954 from Colby College in Maine. He went into the Army for the next two years. He earned a master's degree in 1957 and a doctorate in 1971, both in English from Boston University. His doctoral dissertation was a study of the private eye in the novels of Dashiell Hammett, Raymond Chandler and Ross Macdonald.

Mr. Parker earned his living as a technical writer at Raytheon, and in the advertising department at Prudential Insurance until the doctoral degree got him a full professorship at Northeastern University in Boston, where he began to write seriously. His first novel, "The Godwulf Manuscript," sold within three weeks of completion. Over the next five years, Mr. Parker wrote four more Spenser novels, each increasingly successful. Finally in 1979, he was able to quit teaching and devote himself full time to writing.

So clearly and consciously did Mr. Parker consider himself an heir of Chandler, that the Chandler estate in 1988 asked him to complete a 30-page manuscript left uncompleted at Chandler's death. The result was "Poodle Springs," a novel that carries both authors' names on its title page. It was panned by the New York Times Book Review as "a chaos of tawdry shortcuts." Mr. Parker, who claimed not to read reviews of his work, nevertheless wrote a sequel to Chandler's classic "The Big Sleep," calling it "Perchance to Dream."

Survivors include his wife of more than 50 years, Joan Parker of Cambridge, and two sons.

In interview after interview, Mr. Parker refused the opportunity to make the idea of writing detective fiction mysterious.

"The art of writing a mystery is just the art of writing fiction," he told the Boston Globe magazine in 2007. "You create interesting characters and put them into interesting circumstances and figure out how to get them out of them. No one is usually surprised at the outcome of my books."
Posted by Dan Fleming at 5:47 PM