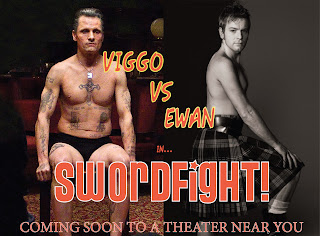 I found myself in a rather deep, yet utterly ridiculous conversation this past week with my friend the Paparazzi.  We are both admirers of fine cinema, and our conversation had settled on the attributes, so to say, of one Viggo Mortensen.  It seems, with the exception of the Lord of the Rings movies, this guy is always getting naked.  Sometimes he'll show his ass, sometimes other dangling appendages.  Other times he'll just bang the hell out of Maria Bello on a staircase.

And if you are going to talk swinging dicks on the big screen, you can hardly leave out Ewan McGregor.  His Mr. Friendly most likely has an agent by now, and before long will be demanding billing above the title.  I'm sure he was tempted more than once to show Princess Amidala his lightsaber while filming Star Wars.

But beside their fondness for onscreen nudity, they have both starred in some dynamite crime films.  So instead of popping this up as a poll, I'm opening it up for comments.  So damn it people, comment.

And if any big time hollywood producers are reading, this idea was mine first.  Give me two days and I'll have a script tailored for a director.  For Michael Bay, lots of action!  For Gus Van Sant, it will be two hours of measuring, but with angst.

In the blue corner, hailing from New York.  He is 5'11 and 51(!) years old.  An accomplished painter, poet, photographer and horse rider, with such films as Eastern Promises, History of Violence, A Perfect Murder, and Psycho under his belt, he will float like a butterfly and sting like bee.  His best ass kicking role to date is Aragorn from the Lord of the Rings trilogy, he is... 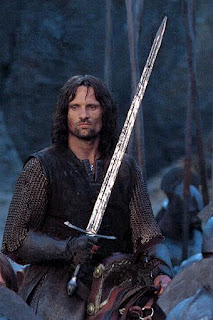 
And fighting out of the red corner,  hailing from Scotland.  He is 5'10.5" and 38 years old.  He likes to ride motorcycles and duet with ex-wives of Tom Cruise.  He is the star of such films as Young Adam, A Life Less Ordinary, Trainspotting, and Shallow Grave.  He chooses life, and to fight!  His best ass kicking role to date is that old desert hermit, Obi-Wan Kenobi, he is... 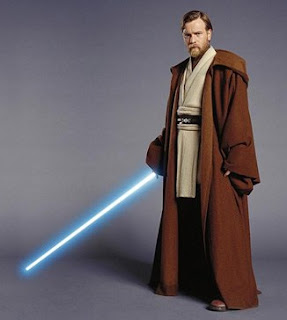 Let's have a good fight gentlemen.  I'd tell you to keep it above the belt, but odds are you're not wearing pants.
Posted by Dan Fleming at 10:20 AM