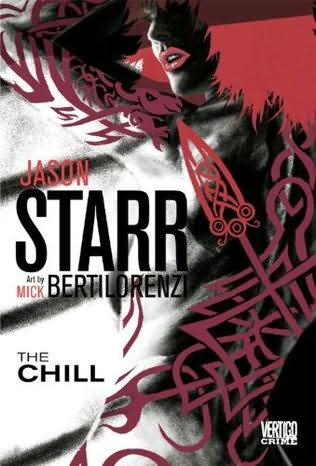 Last year was the first New York Comicon I was able to attend.

I watched as David Lloyd sketched me out a picture of V, shared my love of communist monkeys with Gary Erskine, and shook hands with Geoff Johns, Milo Ventimiglia, and Lou Ferrigno.  I could have gone home happy at that point.  I had resereved the last day of the shows to attend panels.  Toys, Green Lantern, and one other that I could not wait for.

My favorite moment, the one that gave me the biggest smile, was the Vertigo Crime panel.

For me, this was the equivalent of sex on paper.  Great writers, great format, and the hopeful placement in the mystery section of bookstores.

To this point, the sex has been a letdown.

Azzerello, a writer whose 100 Bullets is a masterpiece in any medium, started it off with Filthy Rich.  The story was decent, but the art was less than average.  It was enjoyable, but my expectations might have been a tad to high.
It was followed up, the same day, with Ian  Rankin's Dark Entries.  This would have been better served as a Hellblazer graphic novel.  It seemed shoved into the Vertigo Crime line, when it probably would have sold better promoted as a John Constantine story.  I'm sure there was hope for crossover success, but if I wanted to read a Hellblazer story, I would have purchased the numerous titles available.  I was hoping for something a little more original from this line.

Turns out I only had to wait a few more months. 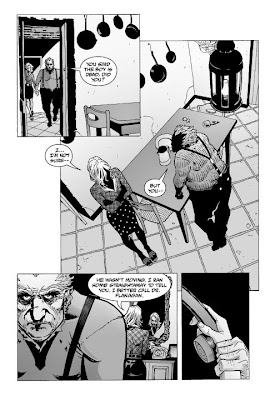 The Chill, written by Jason Starr and art by Mick Bertilorenzi was the book that should have started it all.
Starr I'm familiar with.  His Hard Case Crime Novels with Ken Bruen are nothing short of fantastic.  They are brutal sexy fun, and currently, nothing has topped them within that line.  With his name on this project, I knew the story would be entertaining.
Bertilorenzi, not so familiar.  In fact, had never heard of him.  And after two disappointing artists, I had low expectations.  He surpassed those with ease.  His graytones and blacks finally bring a noir element to a series of books that should have been drowning in it. 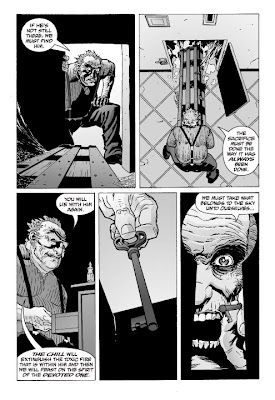 A serial killer exists in NYC.  She's well over sixty, but to those unlucky enough to catch her eye, she appears as their perfect woman.  She'll fuck them, "freeze" them, and while their balls are shrivelling up under their liver, she'll get out of the way so Daddy dearest can plung an ancient spear into their heart.
(I was cool up until the sex, but I'd really hate to have my head strung up in a Yew tree.)
Enter ex-Boston PD, Martin Cleary.  He's an old Irishman with a link to the killer that he'd rather not admit, but cannot ever forget.  He'll do whatever it takes  to end the murders.
Hopefully I've peaked your interest enough to go pick up The Chill, because I'd love to see another collaboration from these two gentlemen. It'd be a shame to not follow this up. 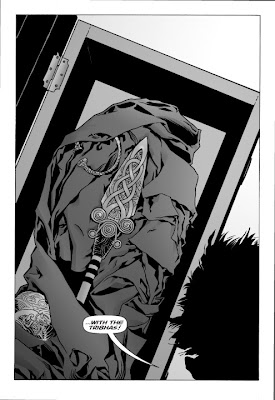 And sadly, this won't be shelved with the mysteries.  Try the graphic novel section.
Posted by Dan Fleming at 10:41 AM