The Long Con Week 2 - The Switch 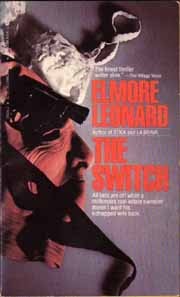 The Switch
by Elmore Leonard.

Time to air out some dirty laundry.

Until recently I had never completed an Elmore Leonard novel.  I'd started Rum Punch, Tishamingo Blues and Mr. Paradise, got about one hundred pages into each, enjoyed the hell out of them, then promptly set them down without turning another page.

When it comes to books, I read whatever is currently in my hand.

I've got the bad habit of reading 3 to 4 books at a time, and my main attention goes to whichever one is closest.  So if I'm reading Rum Punch in the bedroom, but currently find myself in the living room, something else is getting picked up.  I'm not dragging my ass up the stairs to grab a book when at least twenty are withing reach.  (I challenge anyone to walk five steps in my apartment without being a within a foot of a stack.)  Books also get purchased at an alarming rate.  There are volumes bought years ago on the promise that I would get to it eventually.  Those books just add to the piles.

Quite often a great book will get forgotten as soon as a second or third book is stacked on it.  So my apologies to Dutch for past transgressions, but recently it worked in his favor.

I'm hip deep in L.A. Confidential.  And as sparse as Ellroy's prose is, the book is fucking long, and therefore, big.  I'm not carrying it around in my pocket.  So I'm wandering around downtown Bangor, cold as hell, with time to kill.  The comic book store has already gotten my business, and I'm not going to hang out there.  Bookstores have heat. And I have money.

And Bangor is the place to be when you're a booklover.  Sure, we've got Stephen King walking around, but we're also blessed with four great, independantly owned bookstores within a few blocks of each other.  (One sells strictly children's books, but it's still great!)

This time I found myself at Pro Libris, owned and operated by Eric Feury.  (Hope I'm spelling his name right.)  I don't shop here nearly enough, but he always remembers whatever book I was searching for last.  Guaranteed, if I went down there in a month, he'd remember I was looking for Parker novels.  But not finding any, I settled, and I hate using that word in this instance, for Elmore Leonard's The Switch.

Without seeing the last page of any of his works, because of Hollywood, I can say I'm a fan of Leonard.  I only picked up Rum Punch because of Jackie Brown.  You will also noticed, if you've been paying attention, that Out of Sight is a top 10 film of mine. Even Get Shorty was great.  (The less said about Be Cool, the better.)

But Quentin Tarantino's Jackie Brown was twelve pounds of awesome, and it was all because of the characters.  As great as Robert Forrester and Pam Grier were, I was watching that film for Deniro and Jackson.  Their portrayls of Ordell and Louis were top notch, and I don't believe they've been better since.

So imagine my glee, (go ahead and laugh, books make me gleeful) when I flipped over to read the back cover and saw those two names.  Instant purchase.  $1.95 was removed from my pocket without thought.

I devoured those 210 pages in less than twenty-four hours.  And damn QT and his casting, because I couldn't get Deniro and Jackson out of my head while reading.  But it worked!  Even Melanie showed her up with her sweet self. (And yes, I saw Bridget Fonda)

I would be lying if I said The Switch was only a great crime novel.  There is a kidnapping, a police shootout, and some con work going on, but criminality really takes a back seat within the book.  The crime just sets the story in motion.

The story is really about one woman, Mickey, and her happiness at being taken away from her boring life  and husband.  Sure, she was about ready to have a disappointing affair on him, but when Ordell and Louis kidnap her, she begins to feel a sense of...liberation, that she has never felt.  All her life she's been trapped, and this is her ticket out.

Of course, nothing goes as planned.  Frank, her husband, has been shacking up with Melanie, and her doesn't really want Mickey back.  He doesn't want anything bad to happen to her, but he doesn't feel like giving up any of his money to secure her safety either.

And once Louis starts to develop feelings for Mickey the story really begins to pick up.

Overall, it wasn't a perfect novel.  But it was great enough to get me to order twenty-three of Leonard's novels the next day off of Ebay.  (One giant lot, very low price.  Criminal it was.)

There was a copy of The Switch in that lot.  Now I've got an extra.  First person to ask for it, gets it.
Posted by Dan Fleming at 9:22 AM