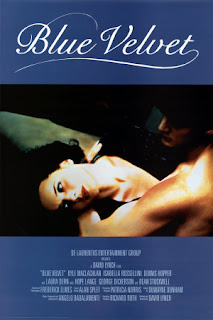 First, just to set the mood.

Blue Velvet is one of my favorite movies of all time. It's funny, scary, and obviously, if it's included in this blog, a great crime movie. I would bet my left ear it is a film noir unlike any other you might have come across. After all, a very suave Dean Stockwell does not lip-synch Roy Orbison in most movies.

Don't let that scare you away. Hard boiled crime junkies will find something about this film to love. Sure, it has it's typical "Lynchian" moments, but when you strip the film of all it's oddities, it's actually a rather by-the-numbers story.

To start, you have Kyle Maclachlan's All American character Jeffrey Beaumont. On his way from visiting his father in the hospital he comes across a severed ear in an abandoned lot. Like any good citizen, he takes the ear to the police station. Should be the end of that, right?

But not for our Junior Holmes,oh no. He wants to explore the dark side of life a little, so he enlists aide of the Detectives daughter, Sandy (Laura Dern). She overhears her father talking details of the crime, and soon this Scooby gang of two is hot on the trail.

Which leads them to Dorothy Vallens (a never better Isabella Rossellini). She's the femme fatal Jeffrey falls for, a singer whose haunting version of Blue Velvet ensnares him. He'd do anything for her. And that includes getting her out from under the thumb of Frank Booth, a drug addicted sadist. But Dorothy will fulfill his rather twisted desires as long as he's got her husband and son. (And that might just be the husbands ear that Jeffrey found.)

Before you can say "Baby wants to fuck", Jeffrey is entangled in the most disturbing love/hate/sex triangle ever.

Don't believe me. Here's something to shrivel your balls.

Still gives me the creeps. First time I watched the film I nearly wet my pants. I shouldn't admit that, but if I had pissed myself I would have sat there, unable to pull my eyes away from the screen.

The film is that hypnotic.

But the real reason to watch this film is Dennis Hopper. Fresh off a century or so of drugs, Hopper turns in his career best performance as Frank Booth, perhaps the greatest villains in cinema history this side of Darth Vader. He's unstable, emotional, and shit balls crazy.

David Lynch does an amazing job drawing you into this seemingly idyllic small town, only to ditch you on the street the locals don't talk about. The script constantly keeps you guessing. Odds are you won't solve the mystery any more than Jeffrey does. Or if you do, you might not be sure you're correct.

But it's worth a viewing or two.
Posted by Dan Fleming at 9:32 AM