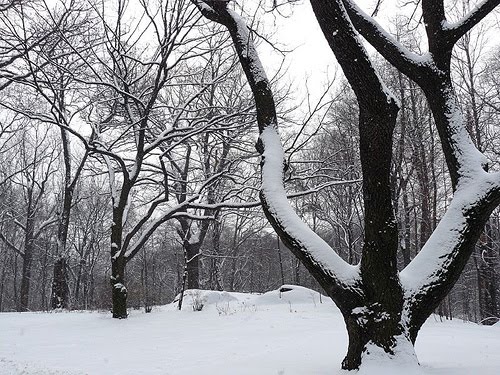 Photo found on Trish Mayo's photostream.  Trish, I don't know you but you do some nice work.
Hothouse
by S. J. Rozan
"Here, there'd been nothing in the cold, nowhere in the gray, only her."
I can understand murderous rage in the face of unrelenting cold and snow. I live in Maine, and while it's not as brutal as Buffalo or Green Bay, but when it's 5 degrees below zero you cease to give a fuck about Geography, or much else.
You just want warmth.  Anything obstructing that is worth destroying.
I felt that rage today.
Snow gently falling.  Some would call it beautiful.  I'd call those people assholes because they most likely aren't trying to drive in it.  The roads were a bit slick, driveable in my matchbox car, but not at 10 m.p.h.  At that speed even a tiny incline turns in Mount Kilimanjaro.  My car suddenly has only a reverse option.
Curse words will then come down harder than the snow.  Had the driver not been a seventy-five year old woman, fists might have flown.  (Actually, she looked rather mean in her rearview, so I might have saved myself an ass whoopin by staying behind her.)
So, despite my cool and calm demeanor, if you ignore the swearing, I can understand rage.
Kelly, the main character in S.J. Rozan's short story Hothouse had that rage.  At least that's what we are told.  Apparently he killled a woman, his girlfriend, because he couldn't handle her attitude and infidelity while the temperatures fell.
Off to prison he went.  The story begins with him having escaped a week ago.  And for that week, he's lived, barely, in the Bronx Botanical Gardens.  He's hungry, near frozen, and almost ready to just allow himself to freeze to death.
So he goes to the conservatory, security be damned.
As luck(?) would have it, he gets inside, and a case of mistaken identity allows him to help out one of the caretakers as the storm comes through the windows.  He begins to feel human again.
Guess how well this all turns out?
Overall, the story had it's moments. The descriptions of the cold certainly hit home.  It's not just a temperature, it's a state of mind.  Logic and reason can go right out the window as the cold comes creeping in.
But the sequence of events that closes out the story falls a bit flat for me.  Everything seemed a bit too convenient.
I appreciate the story he was trying to tell, I just didn't care for the way it all ended.  I believe it would have been better suited as a longer story.
Rating

This story originally appeared in 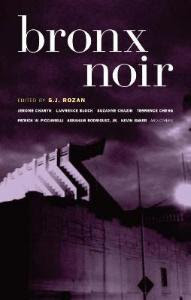