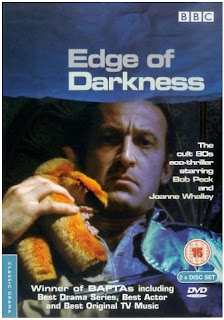 This Friday, a new Mel Gibson flick titled Edge of Darkness opens up.  I've seen a couple previews and I love me some batshit Mel Gibson.  Sure, he's a fine director and actor, but I'd rather see him wig right the hell out, circa Lethal Weapon era Mel.  Based on the previews, I'm not going to be disappointed.
But first things first.
I had heard of the British Miniseries it was based upon, but never gotten the chance to view it.  Figured now would be a good time, since I always try to watch/read the source material before another version is made.  And bless Netflix's heart, they had it and it was available.  To the top of my Q it went, with disc 1 arriving just the other morning.
Strangely enough, right there on the discs menu, there is that weepy guitar music, eerily reminiscent of the Lethal Weapon score that Brit Eric Clapton contributed.?  Hmm.  Edge of Darkness came out in 1985, Lethal Weapon in1987.  One quick Google search later and it is confirmed, Eric Clapton contributed to this score as well.  Coincidence, or fate.  Edge of Darkness used Eric Clapton.  Eric Clapton was used for Lethal Weapon.  Lethal Weapon had Mel.  Mel remaikes Edge of Darkness.  No Kevin Bacon necessary for this loop.  It should be noted that the remake is also helmed by the original director, Martin Campbell.
Would the mini be as appealing as the film looks?
One episode in and I'm sold.
In the first few minutes we meet Ronald Craven, an investigator who is looking into possible voter fraud.  He is told to ease up on the investigation by his superiors, and tells them he will.  At least thats what he lets them believe.  The conspriacy nut hidden deep within my brain takes note of all this, because to me, politics is so shady that if there is indeed an upcoming murder, a politician will somehow be involved.  (And it's hard not to take note when there is a crazed looking man hiding in the bushes outside the meeting hall.)
From there Craven is off to pick up his daughter.
We get a few moments with them, and it's obvious they care for each other very much.  There is a rapport between them, a closeness, that comes through very quickly.  She is easily his world.

That makes her murder that much harder to witness.

She is shot and killed in front of him, by the bush habitating madman, and all he can do is hold her as she dies in the rain.  Again, paranoid part of the brain automatically goes to her.  Although he, being a cop, was believed to be the target, I cannot help but think otherwise.

Neither can he.  Once all the investigators have left, he goes to her room and begins to inspect it.  Not with a reckless abandon, but methodically.  These are his daughters belongings, each one meaningful in some way to him.  He takes care with what he finds.

But he's now positive he's onto something worth looking into.  He promptly takes a leave of abscence, and goes to London to follow up on whatever leads he may find there.  The episode ends with him meeting up with a rather Cloak & Dagger fellow who informs him his daughter had a file, and may be suspected of terrorism.  There was a very real chance that she was the target.

Man, I hate synopsis/synopses, what the hell is the plural of synopsis?

What I don't hate was the acting of Bob Peck as Ronald Craven.  The intensity he brought to this role was powerful, yet understated.  Rarely ever did his voice raise above the level of a whisper, but the rage in his eyes showed through with every uncomfortable conversation.  With just a stare into space, you could see the investigative wheels turning within.  His BAFTA award was completely justified.

And for those of you just pretending to know what a BAFTA is, much like I was ten minutes ago, the BAFTAs are British Academy of Film and Television Arts awards, much like the Oscars that us Yanks celebrate.

I'm going to watch the second episode as soon asI finish typing out this sentence.