The Long Con Week 1 - The Devil's Home On Leave 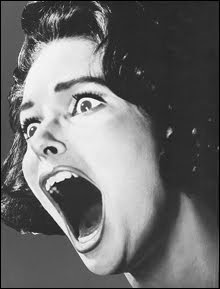 "Anyway," he added. "If you will stay a sergeant you'll always get the shitty end of the stick."
"Maybe," I said, "but I think that's the end where the truth is."

People tend to over-rate the unexpected.

A car crash might be "the scariest moment" of their life, when they damn well know it was the time they broke their Mom's favorite knick knack while she was away, trusting you not to destroy the house in her absence.

You waited for her to come back home, practiced your lie over and over, dread overwhelming any hope of rationale thought. The truth becoming a viable option. The seconds ticked away...the sound of her car in the driveway loosening your bowels. Her eyes burning through your innocent facade.

That car crash, it was over in seconds. Hopefully you walked away from it, all your bits and pieces still attached and your underwear clean.

But for ten seconds or so, you didn't know if you were going to live or die. Life flashing before your eyes? Total fuckery. I've been in a few, and in each instance I barely had time to swear, and I'm a man who can string together a glorious stream of curses in a time of need. There was no time to be afraid. But after, that's when you start worrying about "what could of happened!"

Fear isn't what you experience, but what you expect to experience. Don't believe me, watch Blue Velvet, which I plan to do quite soon, and tell me the car ride with Frank Booth isn't the scariest thing ever committed to film. Why, because you don't have a damn clue as to what is going to happen, and not just because it's a David Lynch film. 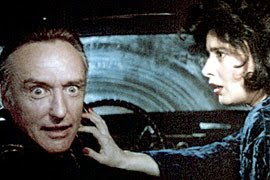 The best sex you had might have been last week with your wife of fifteen years. The heavens might have parted and Jesus himself could have blessed your orgasm, but next week, you'll be on that again. With luck, it will be just as Earth shattering.

But that girl , the way out of your league hottie with the tongue piercing...you don't even remember her name. She picked you up at a bar, took you back to her place, and did "things" to you. When you had a drink with your chums that night, she was the last thing on your mind, but that night, she curled your toes. I'd love to go into details, but your filthy minds have already drifted back into that tawdry filing cabinet where you keep such thoughts.

Admit it, I caught you thinking naughty sex thoughts, and whether or not that sex was the greatest, you'll damn well remember it as better than amazing.

So where am I going with this?

My favorite book is not the best book I ever read (more on that in the future as well). It's the one that gives me the warm fuzzies no matter how many times that cover gets bent back. The first time I read it, it blew my mind, and I connected with it like a new found love.

I didn't realize a book could be written that way. 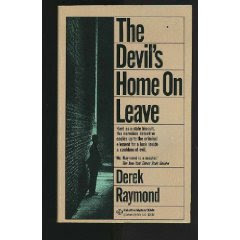 I got that same feeling reading Derek Raymond's The Devil's Home on Leave. It was the bullet that whistled past my ear, the car that swerved at the last second, the girl I can't wait for.

Before I had made it past one hundred pages I had ordered the rest of "The Factory Series."

So why did I love this book so much?

Was it the plot? Not really. Read enough crime novels and rarely will you come across a scenario you haven't encountered before. And honestly, the plot of this book wasn't that great.

But the way it was written, my Lord Mr. Raymond has a way of turning a phrase. Sadly, because I'm not English, I didn't know exactly what he was saying half the time. But that only adds to the enjoyment. The quote from the opening of the blog sums up the book perfectly.

In short, the unnamed Detective of the series spends the greater part of the book solving a particularly nasty homicide. Actually, that's a lie. He knows who did it rather quickly. He spends most of the book taunting the murderer and his superior. And those exchanges are what makes the book. Clarice and Hannibal have nothing on the Detective and the Devil.

I realize I'm not exactly selling you on the book. I don't care. It's good. Read it. Any book that has a bar named Nine Foot Drop is worth the time.

"Inside their minds it's always hell"

Special thanks to The Rap Sheet, the blog that turned me on to this book. Click on their link under my Partners in Crime and read up.
Posted by Dan Fleming at 9:11 AM