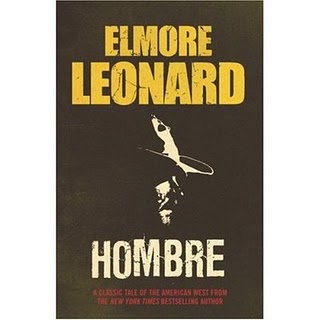 Who is ready for a double shot of Hombre?

John Russell has been raised as an Apache.  Now he's on his way to live as a white man.  But when the stagecoach passengers learn who he is, they want nothing to do with him - until outlaws ride down on them and they must rely on Russell's guns and his ability to lead them out of the desert.  He can't ride with them, but they must walk with him or die.


Sounds simple enough, and honestly, it's a pretty simple story.  There are not a thousand shoot outs or stampedes, or stage coach robbing.  Instead, it's more of a morality play on what it takes to kill a man.

I know.  Sounds pretty deep for a 180 page western.

But don't discount the book because of it's length.  Size doesn't always mean everything.  Leonard packs exactly what is needed into the book to make a compelling story.

There is John Russell, the Hombre in question.  He doesn't talk that much, and asks for even less.  But he's a man, and does what's necessary, even if he's not too happy about it.  It's never a doubt that everyone involved in this story would likely end up dead without him.

His counterpoint is "The McLaren Girl" a young lady once captured and held by "the savages."  Despite her situation, she sees the good in everyone and is the conscience of the story.  She feels everyone deserves help.

And what would a morality play be without a villain.  In a story with thugs and armed robbers, it's Dr. Favor who is the true bad guy.  He's been ripping off people for years, and the tide has finally turned on his enterprise.  It's his money the bandits want, and when they don't get it, they take his wife instead.

But let's not forget the narrator of our tale, a naive young man who is often startled by everything.  It's his viewpoint that draws us into the story, and asks the questions we are thinking.

Maybe he let us think a lot of things about him that weren't true.  But as Russell would say, that was up to us.  He let people do or think what they wanted while he smoked a cigarette and thought it out calmly, without his feelings getting mixed up in it.  Russell never changed the whole time, though I think everyone else did in some way.  He did what he felt had to be done. 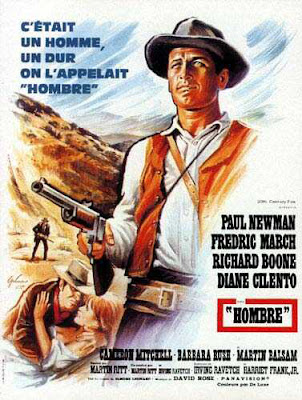 So it's a good book.  But will it possibly compare to Paul Newman?

The movie is pretty darned good.  Newman does an admirable job as John Russell.  He is isolated and stoic, a tough job for a man as handsome and charming as Newman.  His looks at least helped out his likability, even when he was not.

And speaking of that, we get an addition from the novel.  In the place of the McLaren Girl is Jessie (Diane Cilento), the suddenly jobless boardinghouse lady who has a bone to pick with John.  Cilento delivers the sass, and gets many of the films best lines.  (The writers, Irving Ravetch and Harriet Frank Jr., were wise to keep much of Leonard's dialogue.  It absolutely crackles and brings life to stagnant scenes.)  She is also the heart of the film. Compared to the other two ladies, she is downright warm.

Mrs. Favor (Barbara Rush) is given more to do in the film than the novel. She was mostly speechless on the page, but on screen she talks a bit too much for Russell's liking.  She's got a big mouth, and comes off as privileged, prissy, and a bit of a bitch.  Oddly enough, that works in the favor of her husband, Dr. Favor (Fredric March).  In the novel he comes off as a lowly coward, a man who won't even come to the defense of his wife.  Considering how Mrs. Favor speaks of him to the other ladies, I don't blame him for not giving up the money. She obviously does not love him.

The next addition to the film is Doris Blake (Margaret Blye). the wife of the novels narrator Billy Lee Blake (Peter Lazer).  I don't know why she was added to the film.  She's certainly pretty, but she has absolutely nothing to do.  Even her husband, stripped of his narration duties, has little to do on screen. They could have been removed completely and I wouldn't have missed them.

What I wouldn't change for the world is the cinematography of James Wong Howe.  Shot on location in Arizona, this film is absolutely beautiful to look at, capturing the landscape in all it's cinematic glory.  And director Martin Ritt was wise to take advantage of that skill.  His direction was nothing to wag a finger at.  The man knows how to frame a shot and keep the picture moving.

I'd be willing to say Hombre is a classic western...but I'll still take the book.