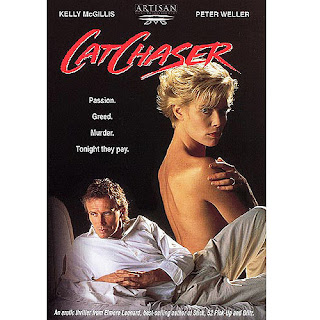 A Miami hotel owner finds danger when be becomes romantically involved with the wife of a deposed general from the Dominican Republic where he fought many years back.

Dear God, what have I gotten myself into this time.  This is what I thought a mere two minutes into Cat Chaser.  Not sure if it was the voice over, the horrible synthesizer score, or the monotone delivery of Peter Weller, but almost immediately I knew this film was going to be terrible.  And why on Earth is Reni Santoni narrating the film?

Is there any wonder that Abel Ferrara disavowed this film, supposedly after it was taken away from him and re-edited?  Nothing about this film shows his involvement.

I'm a fan of Peter Weller.  He was good in Robocop and his performance in Naked Lunch was pitch perfect, but he is woefully miscast here.  If I could use one word to describe Leonard's characters, it would be energetic.  That doesn't mean they are bouncing of the damn walls, but there is either energy in their voice, actions, or even eyes, but Weller is just so blank.   That voice that worked so well as Bill Lee just puts me to sleep here.

And he's not the only acting problem.  Frederic Forrest has long been an actor that intrigues me.  Sometimes he's amazing, other times he's shit.  He's neither here.  He just is.  And Kelly McGillis?  What the hell happened to her hair? Not good blonde. I realize that's nit-picky, but it was terribly distracting from her dull acting.  At least Charles Durning was in the film.  Him I like. Every scene he happens to be in is elevated.

I see the pattern now though.  Whenever an adaptation fails, it almost always gets the tone wrong.  Far too much time trying to be serious.

So what was there to like about this movie.  The locations look authentic, even if Puerto Rico is substituting for the Dominican Republic.  And the archival footage was good.  Man, that's some faint praise, but it's all I got.

On the bright side, even after knowing that his books would be adapted into films like this, Elmore Leonard continued to write.  For that, he is a literary hero.

If you need to see the trailer, it can be found here. Not even YouTube wanted anything to do with this movie.
Posted by Dan Fleming at 10:25 AM