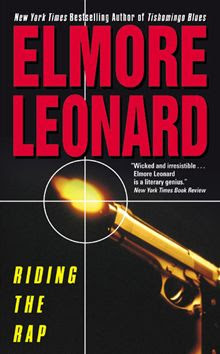 I don't read Elmore Leonard's books for the plots, and I'd be surprised if anyone did.  Not that they are terrible, or poorly thought out, quite the opposite.  But after the first few chapters, they become secondary, if not tertiary to everything else.

Based on the past two reviews I've done, Pronto and City Primeval, it's hopefully obvious that I read Leonard for where the characters are, not where they are meant to be going.  It's all about the now, both with my reading experience and the people who populate his fiction.  Any long term plans, despite the thoroughness (which is usually lacking) and expectations (unusually high), often go out the window within a few chapters.  His characters might expect all their best laid plans to come to fruition, but I certainly don't.  That's fine.  I'm not hoping for the happy endings these guys think they deserve.  I'm along for the ride.

So if I'm not reading for the plots, does that make them unimportant?  I certainly don't want to dismiss them, after all, how would his creations get from point A to point B (with many stops in between) without them.  Without a plot, how else would I describe Riding the Rap to my friends?  I'll let Raylan do it.

Ganz owes Harry a lot of money.  Harry sends Bobby Deo to collect.  Bobby tells Harry to meet him, he has the money, but he doesn't show up.  Instead, Harry happens to run in to Dawn Navarro who, it turns out, happens to know Warren Ganz - from when he was a suspect in a homicide and she touched him.  Harry disappears, and now Bobby Deo, ex-con, former bounty hunter, is hanging out at Ganz's house with a guy name Louis Lewis - however you spell it, check him out - while Ganz happens to be somewhere in the keys.


There you go.  That's most of the necessary information you need in one easily digestible paragraph.  Sure, it seems a little simple, but it's what's needed to push the characters into (in)action.    Wild, intricate plots have their place in fiction, and in cases like The DaVinci Code, it's all they have going for them.  But I hate that book.  Put the characters through all the "cool, mysterious" shit you want, but in the end, if I hate them and the pedestrian way the book is written, I'm going to put it down and never pick it up again.  Based on the jacket copy I gave Dan Brown a chance.  I have no doubt I'll never pick up another of his books again.

So plot isn't everything.

Leonard's books have enough plot to write the jacket copy, but they are loose enough to let his characters live without having to follow a set structure.  It allows an "anything can happen" feeling to emerge in this reader, and I like that.  People can die, plans can get shot to hell, and people that have the tiniest parts might just have enough to them to make a difference in this book and show up again in another.  (Hint: Dawn's story isn't done.)    Hell, after two books, a short story, and a television show, Marshal Raylan Givens is quickly becoming one of my favorite characters, which is a credit to the material because in both Pronto and Riding the Rap he isn't exactly the main character.  Which brings up another discussion point I won't get into now, but do Leonard's books even have main characters?

So...the book.  While not the best, it was an excellent follow-up to Pronto, and established Raylan as a character to watch. And even average Elmore Leonard is better than most.
Posted by Dan Fleming at 10:21 AM