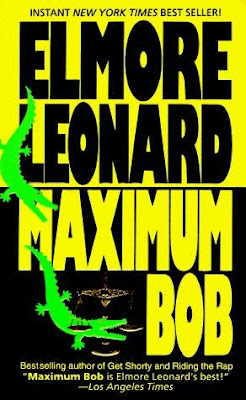 Hard-ass Palm Beach County judge Bob Isom Gibbs enjoys sending even petty offenders away to do hard time - which has made the list of miscreants who want him dead longer than a fully grown Florida gator's tail.  And a good number of his ill-wishers are probation officer Kathy Baker's clients, including young Dale Crowe and his psycho uncle Elvin.  Now, Kathy's got an even more daunting task than keeping BIG's horny hands off her:  keeping "Maximum Bob" alive.  Because Gibb's many enemies seem to be willing to go to any lengths - be it death by amphibian or some more tried-and-true method - to  permanently and the career of an oversexed, racist jurist who's more interested in scoring than saving his own red neck.


I hate to say this, but despite all the interesting characters I encountered, I felt let down by the time I finished this book.  Of the titles I read this month, Maximum Bob was the one that took me the longest to finish.  And itt's not that a week is a terribly long time to read a book, but I can finish most Leonard books in just a few days, blazing through the chapters unable to stop turning the pages.  Not the case here, as most of the chapters dragged along.

For a book titled Maximum Bob, I sure don't feel like I got enough of him, maybe "medium amount" Bob.  To me, that is the major flaw, not giving the most interesting character enough page time.  The supporting cast is okay, with Kathy Baker being the lone stand out.  She's another tough as nails Leonard female, and her back and forth with the slime ball men that inhabit this book is fantastic. She can certainly hold her own.  I really wanted to like Elvin as "the villain" but most of the time he just bored me.  He talked a good game, but for most of the book that's all he did.  He, like just about everyone else, was the opening act I sat through waiting for the star to take the stage.

It's clear the moment he is introduced that Bob Gibbs is the headliner, the show stopper.   He is one hell of a character, and if it was 300+ pages of just him ranting and lecturing, you wouldn't hear a peep from me.  This guy's unabashed sexism, racism and just about every other "ism" is captivating.

He doused their glasses with bourbon and took a good sip of his, beginning to believe he might have to strangle this girl if he couldn't get her drunk.  Maybe this wasn't a good time to be thinking of romance.

At a party I would avoid him like a plague (much like Kathy tries) but on the page he is magnetic.  Without him, the book just treads water.  An average Leonard outing, despite the excellent use of alligators.
Posted by Dan Fleming at 10:20 AM