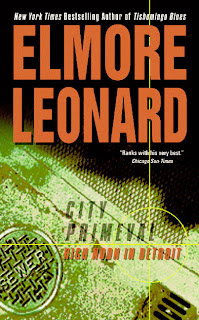 Clement Mansell knows how easy it is to get away with murder.  The seriously crazed killer is already back on the Detroit streets- thanks to some nifty courtroom moves by his crafty looker of a lawyer - and he's feeling invincible enough to execute a crooked Motown judge on a whim.  Homicide Detective Raymond Cruz thinks the "Oklahoma Wildman" crossed the line long before this latest outrage, and he's determined to see the hayseed psycho does not slip through the legal system's loopholes a second time.  But that means a good cop is going to have to play somewhat fast and loose with the rules - in order to maneuver Mansell into a wild Midwest showdown that he won't be walking away from.

Since I made such a fuss over Leonard's ability to create characters last week, I'm going to completely ignore it today.  For the most part.  There are only so many ways to praise an author for a certain trait before it borders on sycophancy.

Some guys have a knack for this, and of course, some don't.  Quentin Tarantino, that man can write a scene.  Movies like Pulp Fiction, Kill Bill, and Reservoir Dogs might crackle with dialogue and cool, but it's the scenes I remember.  While Sam Jackson might have expressed his furious anger all over Frank Whaley, it's not just the speech I remember.  Think back and feel the tension that was created as Sam washed down that tasty burger with a beverage.  The speech was nothing but the climax of all the tension created as soon as Sam and Travolta walked through that door.   In five minutes, we learned a great deal about all the characters involved.  That's effective scene writing.

So it should come as no surprise that Tarantino kneels at the altar of Leonard, so much that his best movie, in my opinion, was an adaptation of Rum Punch.

In today's novel of choice, City Primeval, Chapter Two presents us with a scene, while not nearly as bloody and frightening, does a stellar job of getting us into the mind of the main character, Detective Raymond Cruz.

It's not a complicated chapter, mostly filled with Cruz talking to a reporter over drinks and dinner.  The reporter, a female, is writing a piece on macho cops.  At this point, we just met Cruz, and macho doesn't immediately come to mind.  He seems quiet, tired, but nice.  There is no bullshit posturing that one associates with a typical "macho" cop.  But the reporter is relentless, pushing all the right buttons, hoping for a response that will correlate with her preconceived notions.

"Why can't a cop leave his macho role at headquarters and show a little sensitivity at home?"

Can you believe that question?  If I was Cruz, I would have walked away.  I'm no murder detective, but I realize they see things I hope to never lay my eyes on.  We should consider ourselves lucky they don't lock themselves in a room at the end of the day and play with their own feces.  But I give credit to the fictional Cruz.  His answer was perfect, and revealed a tremendous amount of his character.  It set the tone for the entire  book, and anyone paying attention should know exactly how the confrontation between himself and Clement Mansell will end.

"I'm serious.  You're the wife.  You say, 'Hi, honey.  Have anything you'd like to share with me?'  And I say, 'As a matter of fact, honey, I want to tell you something I learned today about sharing, as a matter of fact."

The girl from the News was suspicious, but said, "All right, what?"

"Well, a young woman was murdered," Raymond said solemnly.  "Cause of death strangulation, asphyxia due to mechanical compression, traces of seminal fluid in mouth, vagina, and rectum-"

The girl from the News said, "God."

"That's what he said, let his buddy have seconds.  Well, the buddy gets in there and won't stop.  I mean he just keeps, you know, going.  Make a long story short, the girl starts screaming and the buddy panics and strangles her to shut her up.  But, he's not sure she's dead.  What if she comes to and identifies them in a lineup?  So they find this big chunk of concrete that'd been used to anchor a fence post - weighed down about a hundred pounds - and they pick it up and drop it on the girl's face.  Pick it up, drop it on her face again."

The girl from the News was reaching for her big mail-bag purse.

"Pick it up, drop it.  When we found her, we thought maybe a semi had run over her.  I mean, you wouldn't believe this was a girl's face."

"No, it isn't funny at all. but then the guy said in his statement-"

The girl from the News was walking away from the table.

"He said, 'This is what I get for playing Mr. Nice Guy and sharing my broad with my buddy."

Sums up Cruz's character pretty well.  He played nice with the reporter until she wouldn't let up, and then he made his point, even if it meant being stuck with the check.

Now take a guess if the books full title, City Primeval, High Noon in Detroit gives you any more clues?
Posted by Dan Fleming at 10:15 AM