To the Mattresses Week 39 - Jackie Brown

Otherwise known as the movie that started it all...for me anyway.

It was 1997, and I was still a young, optimistic fresh faced kid, barely old enough to drink, and still eager to tackle the world.  My how times have changed.  Anyway, I was in love with the films of Tarantino, having recently devoured Reservoir Dogs, Pulp Fiction, True Romance, and From Dusk 'Til Dawn.  At that point the man could do no wrong.  His movies were breaths of fresh air, hyper violent and wordy, but endlessly cool. 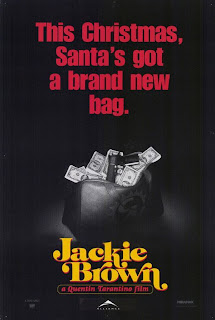 I couldn't wait for his next movie, even with it's oddly plain title.

A bag of cash and a gun?  This movie was going to make millions.

Of course, Titanic came out and people soon forgot about Jackie Brown as it limped it's way to $39 million, a far cry from the $100+ that Pulp Fiction brought in.  To many it was a disappointment.

To me, it was a revelation.

Years later, it's still my favorite Tarantino film, and it's because of Elmore Leonard.  Based on his novel Rum Punch, Jackie Brown explodes with characters and situations that have become a staple of his work.  Bumbling but overconfident criminals, can't fail plans that go horribly wrong, and usually, a voice of reason to which no one listens.

And it brought back the unbelievable cool Pam Grier and Robert Forrester.

During the press for the film, I constantly heard Quentin talking about the books of Leonard, and how much he enjoyed them.  If they were good enough for his sensibilities, surely I'd like them.  I headed down to the newly constructed Borders and picked up a copy of Rum Punch, even if it did have the movie poster as the cover.  (Sorry, I realize it's done to capitalize on the popularity of the film, but I want my books to have the book covers, not the movie poster.  Drives me up a wall.)  While I should have been studying, or reading one of my required texts, I instead read Rum Punch.  Then I read it again.  Thankfully, it wasn't just a re-hashing of the movie, as enough was changed for Jackie Brown to let the book stand on it's own.  And as much as I love Jackie Brown, I like Rum Punch better.

Oddly enough, the book that got me back on the Elmore Leonard train was The Switch, starring those fantastically inept criminals Ordell Robbie and Louis Gara.  And despite there character descriptions, I couldn't help but envision Samuel Jackson and Robert DeNiro.  I'm okay with that.

As a treat, here is an interview with Quentin from 1997 from Tom Snyder's show.  Tarantino is always fun (okay, sometimes annoying) to listen to, but don't be surprised if you end up yelling at the screen, begging for Tom Snyder to just shut up and let him talk.  They finally get around to talking about Jackie Brown towards the end of Part 1