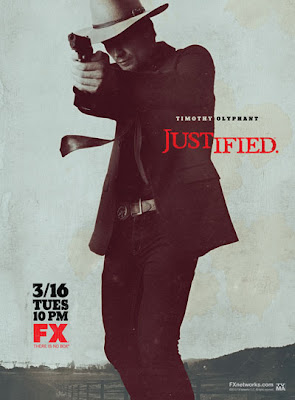 With an opening episode, the most important thing is to establish the main character as quickly as possible.  I don't want to spend an entire episode figuring out who is who and why they are doing whatever it is they are doing.  Sure, don't spell it all out and have the characters wear T-Shirts that say, "Hello. I'm Donnie and I'm out of my element." but give me something to latch on to.

Consider that goal accomplished with the opening scene of Justified.  You want to know who Raylan Givens is? He is a U.S. Marshall who gave a man 24 hours to get out of town or else he would shoot him on sight.  When that man didn't leave, and made the mistake of drawing on him, Givens shot him dead.  No remorse.  No regrets.

The rest of the episode follows the plot of "Fire In the Hole" (which will be talked about soon), so I'm not going to go over the details with you.  If you've read the story, you'll be happy with the adaptation.  A few changes have been made, most of them for the better.  I doubt Dutch had a television series in mind when writing the story, so I can easily forgive the one major change.

As for the actors, well, I want to find the casting director and give them an uncomfortably long hug.  Genius work.  For those, like myself, who have been missing The Shield, Walton Goggins is back on television.  Instead of being a wide eyed sidekick, Goggins plays Boyd Crowder, the good ole boy from Raylan's past who happens to be the leader of a local white supremacy movement.  He's bad news, but played with a heaping helping of redneck charm.  Even the secondary players, such as the other Marshalls or Goggin's gang are played credibly by those given the job.  It will be nice to see them given some moments as the series progresses.

But the reason I watched the show, other than the source material, is Timothy Olyphant.  Since I first caught him in Doug Liman's Go, he's had my attention.  His film appearances have never been well chosen to suit his particular talents, but anyone who caught Deadwood knows this man was born to play  a lawman.  He's got that coiled rattlesnake intensity in his eyes, and we wouldn't expect him to back down to any man.

I managed to catch the second episode before writing this review, and while it doesn't hold up to the promise of the first, there is enough there to keep me coming back for more.  I'll revisit Justified again in two weeks, at which point I'll hopefully have the first season completed.