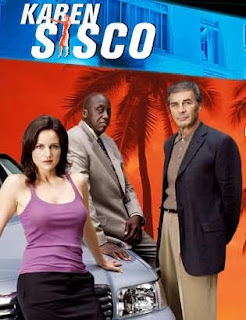 "They" say the harder you try to remember something, the easier it is to forget.  Should we assume that nugget to be true, then an argument can be made for the inverse assumption.  Try to forget, and it just burrows itself in deep.

So I try to forget a few things before watching Karen Sisco.  I drive every thought concerning Out of Sight, well, out of my head.  The skill with which it was made, the pitch perfect script, assured direction, and spot on casting.  (Hell, the movie made me forget how much I dislike JLo as an "actress.")  To judge this show against the film would be unfair.

I forget that I just read "Karen Makes Out" (reviewed tomorrow!), the short story which most of the first episode, Blown Away, is based on.

I'm trying to forget far too much.  Karen Sisco has so many expectations, that even moments before I cue up the show, I'm sure it will fail.  Nothing short of an amazing episode is going to be a let down.

Perhaps the executive who gave this show the untimely axe tries to forget?  At the very least, ABC has developed as severe case of Alzheimer's, because Karen Sisco deserves to be on DVD.  Actually, that's not enough.  This show should still be on the air.  Also, in case you are wondering, I've already forgotten what nefarious internet source I retrieved this episode from.

I'm not going to get into the plot synopsis, but if you've read the short, you know most of the story.  (If not, check back tomorrow)  However, the script writer, not content with just that, also added in some flashbacks from a previous case that Karen is having some issues remembering, as well has her father trying to nail an insurance scam.  Both additions strengthened the story and allowed for additional characterization.

Characters are introduced and relationships developed, not need for exposition or previous knowledge of the source material.  It's a tough feet, and writer Bob Brush and director Michael Dinner nail it.  Carla Gugino is far better in the title role than Jennifer Lopez was on her best day, and as much as I loved Dennis Farino as her father in the film, Robert Forrester was an excellent choice for a replacement.  And who is that as her boss?  Holy Hell it's Bill Duke!  Where has that guy been?  If the man can stand toe to toe with a Predator and Arnold, than surely he will be an excellent foil for Sisco.

Based on the one episode I've seen so far, I'm appalled at ABC, and the viewers who ignored this show.  (Okay, I include myself in that as well.)  Karen Sisco had so much going for it.  The style, the score, the editing, even a guest appearance from future McDreamy, Patrick Dempsey.  And check out this intro!

If you manage to catch an episode, it's a show you won't forget.
Posted by Dan Fleming at 11:21 AM