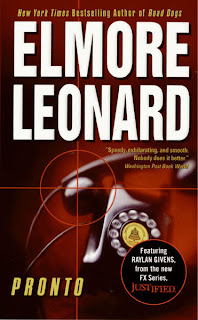 Harry Arno has been set up.  The FBI wants his boss, Jimmy Cap, but they've got nothing on him.  So they put the word out that Harry's been skimming money from their bookmaking racket.  It's a solid plan, because, wouldn't you know, Harry has been doing just that for years.

So when Jimmy Cap puts a hit on him, Harry's got enough cash to make a run for it to Italy, to a small town where he once met the expatriated American poet Ezra Pound.

There is another problem.  U.S. Marshal Raylan Givens is on Harry's trail.  Arno once gave him the slip years ago, costing him a promotion.  And while it would be easy to just accept the mob's bribe to leave Harry to them, Givens wants to bring him home safely.  None of this sits well with Jimmy's boys, The Zip and Joe Macho.  They each want to cap him for different reasons.

But Zip and Joe Macho don't get along.

Characters.  That's my focus on today's review.  Leonard's got a way of creating characters that are interesting, deeply flawed, comical, and 9 times out of 10, likable.  Even the lowest of the low, guys you would never want to meet become real and more importantly, really interesting.  Barely any of them ever make a good decision, and when things do go right, it's often by accident.  Often they are done in by their own overconfidence.  Hell, the "villains" are often more moral than the "good guys."  And despite the problems they find themselves in, I know I hope they always work their way out.

Harry Arno is a typical low man on the mafia totem pole.  He's got a love for Italy and Ezra Pound poetry.  He's in his sixties, and has a model girlfriend twenty years his junior.  We should like this guy, after all, he's been ripping the mob off for years and getting away with it.  And he's the main character.  Shouldn't we like him?  But he's also a loser who doesn't really know what he wants and talks to much when he drinks.  I didn't exactly want him dead like Jimmy Cap, but I wasn't hoping he would get off free and easy.

Then there is his girlfriend, Joyce Patton.  She hasn't exactly set the world on fire, spending time as both a stripper and a model, but she can surely do better than Harry.  She goes along with his escape plans, but eventually sets her sights on a certain Marshal.

Which brings us to U.S. Marshal Raylan Givens.  We soon learn that he's let Harry slip from his fingers once before, and yet again, Harry ditches him.  Shouldn't Marshal's be a bit more competent that this?  But Raylan is not your typical macho U.S. agent.  With his cowboy hat and boots, he certainly has a "sheriff" quality about him, and despite is lackadaisical manner, he is deadly when he needs to be.  And he just might have his eye on a certain lady.

Then we get to the hoods.  Both Tommy Bitoniti, "The Zip", and Nicky Testa, "Joe Macho," are sent to Italy to retrieve Harry.  These guys do not like one another.  The Zip is an old fashioned Mafioso, dressed in sharp suits, speaks more with his gun than his mouth.  Joe Macho is the exact opposite.  He doesn't do much than stand around Jimmy Cap and look tough.  He might be muscle-bound, but he's got pudding for brains.  He talks to much and is making the mistake of sleeping with Jimmy's girlfriend.  The Zip wants to kill him, and he wants to kill the Zip.

Throughout the book, Leonard puts these characters in situations that might prove deadly to any of them at any time.  Using the multiple points of view allows us to align ourselves with whomever we choose, and there is a chance that any of the characters could be shot dead at any minute.  That unpredictability is a great strength.

Another strength of Leonard's books is you never know when these characters are going to show up again.  Those that survive might be back.  They might not always be the stars, but a cameo is never out of the question.  It gives the feeling that you are reading a series, without always having to stick to one main character.

I'm hoping I see a few of these guys again.  At the very least, I know Raylan ends up in the FX show Justified.
Posted by Dan Fleming at 11:09 AM