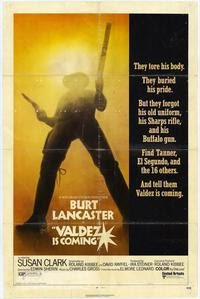 From the trailer, it appeared that Valdez is Coming is a revenge flick.  However, within a few minutes of the film's start, it was
obvious this film was going to be something more.

The movie begins with a bunch of men shooting at a shack.  Mr Tanner (John Cypher) recognized the man there, and swears he's a killer.  Valdez isn't so convinced, so he makes his way down to talk to the target.  His caution is warranted, as it is a case of mistaken identity.  As Valdez (Burt Lancaster) goes to get his discharge papers, one of Tanner's goons fires, causing another shoot out.  This time, it is Valdez's bullet which finds the target.

And yes, it was the wrong man.

Valdez hopes for a little justice.  The man left behind a pregnant wife, and it's his hope that the townsfolk will chip in to help out.  Not much luck with that.  The man he killed was African-American, the pregnant wife, Native American, and Valdez himself is Mexican-American, with the wealthy rancher being as white as they come.  And the racism isn't just hinted at, it's out in the open, with some surprising racial slurs being tossed about.  It's a rather uncompromising example of the racism that I'm sure existed, but was usually glossed over.

Valdez presses the matter with Tanner, pleading for his financial help in doing the right thing.  All it gets him is tied up like a scarecrow and sent on his way into the desert.  This is where the classic revenge motif kicks in, as Valdez guns for Tanner and his men, with the message "Valdez is Coming" sent as a warning.

What follows is lots of good old fashion Western gunfights directed with surprising skill by rookie director Edwin Sherin (who went on to direct episodes of Homicide and Law & Order, which he also produced), with lots of blood and steel.

Despite all the soaked Earth, this is still a movie about honor.  Valdez only does what he does in hopes of securing $100 for the widow.  He gives Tanner ample opportunities to present the money, and only kills because it is necessary.  Even his kidnapping of Gay Erin (Susan Clark), Tanner's woman, is only meant to draw him out.  While Valdez represents honor, Tanner and his men will sink as low as possible to kill him, making it quite easy to route for one over the other.

Valdez is Coming is a tight, tense, ninety minute quality film.  As I mentioned, the direction is excellent, and the performances, especially of the two leads, are believable and captivating.  There isn't really a week spot in the film, despite all the misgivings about the open ended finale.  I won't give it away, but I thought it was just another brave choice in a film that made many.