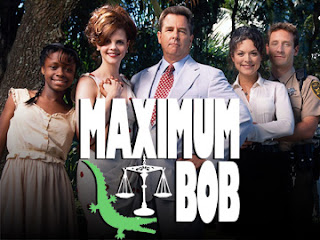 Normally I wouldn't be writing this.  I've never seen a single scene nor frame of this show.  So why the hell is it today's topic?

Because the internet has let me down.  Normally, when I haven't seen or heard of something, anything, all I have to do is log on, maybe do a little bit of searching, and bam! there it is.  But not this time.  I've scoured the web, looking behind every website, peeking underneath every torrent (it's dirty there) and have come up with nothing.

Other than a wikipedia page and a few other assorted odds and ends, there is nothing to prove that the show Maximum Bob even existed.

Maximum Bob was a short-lived television series that debuted in 1998 on ABC TV. Starring Beau Bridges, the show was based on Elmore Leonard's 1991 novel with the same title.  The series centered around an ultra right-wing judge known for giving the maximum sentence to defendants. Other characters included the Judge's psychic wife Leanne, who channels the spirit of a young slave girl named Wanda Grace, a widower sheriff with a knack for ballroom dancing and a spitfire female public defender from Miami. The few story lines produced served mainly to introduce the cast of eccentric characters, and were set in the fictional back woods Florida town of Deepwater. Judge Gibbs' young wife performed in a mermaid show until she nearly lost her life to an alligator, after which she abruptly retired from the business and can no longer even go in her swimming pool. Kathy Baker, a comely defense attorney, comes to Deepwater on a case and becomes a romantic target for the local sheriff, as well as a potential conquest for the always lustful judge. The show also includes a family of inbred, myopic disfunctionals with a criminal bent.

Sounds fantastic, right?  Only  no one watched and it was axed after only seven episodes.  I can understand ABC not wanting to waste there money releasing it on DVD, but seriously, no Youtube footage?  Nothing on Hulu?

So I come to you dear readers.  If anyone out there has a link which would enable me to watch even one episode I would be greatly appreciative.