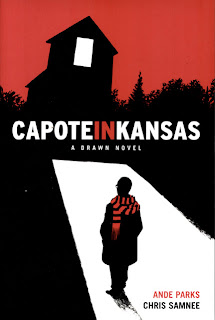 Fear can be terribly debilitating.  Overwhelmed by your own heartbeat, the rush of blood in your ears, it can be impossible to move, let alone make a rational decision.  Some, when confronted by fear, do nothing.  It's safe to let happen what will happen.  Often, those are the victims.  Others do just the opposite.  The fear takes over, and soon, blood is spilled.  Many a murder springs from fear.

Was the murder of a Kansas family in 1959 caused by fear?  What went through the mind of those two men, Dick Hickock and Perry Smith as they went room by room, and extinguished the life of every man, woman, and child inside?  I'd like to believe that fear played a part in their actions.  Perhaps they were afraid of leaving witnesses to their crimes, someone who could finger them to the police and ensure their time in prison?  I can understand wanting to remain free, and doing what was necessary to achieve that.  But the possibility that someone could commit cold blooded murder on folks they don't know, well, that just leaves the rest of us to be afraid.

Capote In Kansas is not a book that dwells on the murders.  As Ande Parks puts it in his afterword, he's not here to retell the story already told.  "The job has already been done, and brilliantly."  He is referring to Truman Capote's landmark work of non-fiction, In Cold Blood, perhaps the first true crime "novel."

Instead, this graphic novel concentrates on the man himself, and the fears he encounters writing the book which would make him a superstar.  Capote came from the New York literati, where he was well respected and had earned a reputation as a solid writer thanks to his story Breakfast at Tiffany's.  But he wanted something more.  He wanted to write a "real" story.  So he left behind his boyfriend, most of his friends, and his way of life to journey to a small town in Kansas to write of murder.

He wasn't exactly accepted early on.  He came across as aloof, uncaring, and it's a testament to the character of the townsfolk that he didn't' receive a daily ass whipping.  Soon enough, he was doubting himself.  Was this going to succeed?  Should he just run home to New York and forget about the whole thing?  Spurred on by his friend Nelle (Harper Lee) and the help of Agent Dewey, he decided to stick it out, fears be damned.

That's what this story is about, internal fears.  The doubts that stop us from accomplishing anything great in our lives because we feel deep down that we just can't do it.

"I want to create a form no one has done before: a sort of non-fiction novel.  The readers will feel those tragic events not as though they're reading about them in a dry newspaper account, but as if they are living in them.

I'm not coming home soon, my dear.  I have no chance of success unless I lose myself completely in this place...these people. "

And Parks makes some brave choices.  He's admitted upfront that he's fictionalized some of the details, so when Truman starts talking to the ghost of Nancy, one of the victims, it doesn't come as a shock.  It's conversations with her that allow Truman to come to grips with the story, to feel like he has the right to ask the questions that need to be asked.  It an effective device, and it leads to a wonderful moment at the end of the book that left this particular reader with a slight grin on his face.

Chris Samnee, in what I believe was his first major work, absolutely (forgive the expression) kills with his art.  We needed to feel Capotes isolation, both mentally and physically, and Samnee's strong black and white storytelling  do just that.  Numerous single shots of Capote, alone, bathed in shadows and light, show us just how lonely he must have felt.  See that striking cover?  It just gets better inside.  His facial expressions range actual human emotion, something many artists have problems with.  When someone is angry, or more often hurt, it's easy to recognize.

If you want all the bloody details, this isn't the book for you.  Go read In Cold Blood.  Honestly, you should do that anyway.  It's brilliant.  But if you want a humanized companion piece, you couldn't do any better than this drawn novel.
Posted by Dan Fleming at 10:48 AM