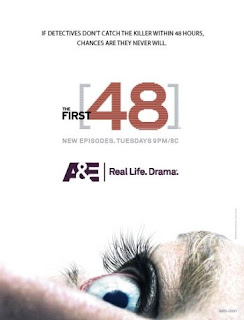 For homicide detectives, the clock starts ticking the moment they are called. Their chance of solving a case is cut in half if they don't get a lead in THE FIRST 48®. Each passing hour gives suspects more time to flee, witnesses more time to forget what they saw, and crucial evidence more time to be lost forever.


THE FIRST 48® follows detectives from around the country during these first critical hours as they race against time to find the suspect. Gritty and fast-paced, it takes viewers behind the scenes of real-life investigations with unprecedented access to crime scenes, autopsies, forensic processing, and interrogations.

Although I'm not the biggest fan of procedurals, The First 48 really is an excellent show.  By giving themselves a time frame of 48 hours, the producers of the show have put the audience up against a ticking clock, and despite having zero involvement in the case, I could feel a sense of tension creeping in as that clock ticked down.  I can only imagine how it must feel for the detectives, knowing that a chance at solving the crime could be slipping away with each second.

The website has past episodes, along with updates, as well as an investigation game, a list of victims resources, and the oppurtunity to learn more about the investigating detectives.