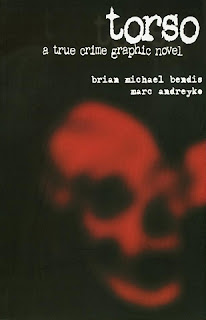 Elliot Ness was a glory hogging asshat.  Who would have guessed?  Kevin Costner portrayed him as such a nice fellow in The Untouchables.

In the year 2000 (I can’t even type it without thinking of Conan), I was still just getting back into comics after a ten or so year absence. I was fully divested in Batman again, but was looking for other books to pick up in my weekly sojourn to Ye Ole Comic Shoppe. (Not it’s real name.) When looking for a new read, it’s usually recommended by retailers to check out new Number One issues. Most I picked up were usually shitty, but a few were worth the price of a blind buy. Sam & Twitch, written by an unknown-at-the-time-to-me, Brian Michael Bendis, was actually quite good. So good, that when he got picked up by Marvel to write Ultimate Spider-Man, I bought a copy or two on his name alone, and I eventually made a few pennies selling them on the back issue black market. Perhaps the only time my comic habit has brought in a profit.


But my enjoyment of these few books made me search out his earlier, creator owned work. Thankfully Image Comics had them all available in trade, and while at a convention in Pittsburgh I was lucky enough to both meet Mr. Bendis and pick up both Torso and Jinx in the 50% off bin at a dealer booth. Now that I think about it, I have no idea why I didn’t have him sign a copy for me.  At least I got a nice foul mouthed sketch.

While I enjoyed his work to this point, Torso made me a life long fan, despite his many attempts to rape the childhood memories of Avengers fans and rip the internet in half.  (If you're not a comic fan, don't even try to make sense of that last sentence, I beg of you.)

Co-written with Marc Andreyko, and illustrated by himself, Torso tells the horrifying true story America’s first serial killer, Cleveland’s very own Torso Killer. Mr. Untouchable himself, Elliot Ness, who had been brought in to clean up the corrupt police force, put himself in charge of the case. Would it be another feather in his G-Man cap or turn into America's version of the unsolved Jack the Ripper murders?

I’ll let you read the story and figure that one out for yourself. But believe me when I tell you, Torso is worth picking up.

Those familiar with Bendis’s rat-a-tat Mamet-speak will be happy to read it in all it’s glory in this volume. His dialogue sparkles and drives the story forward despite all the chit chat. It’s hard to explain unless you are familiar with it, but those who enjoy shows such as The West Wing and Gilmore Girls will know what to expect. Bendis’s characters have never been afraid to fill up a page talking about anything and everything, and it always feels natural.

As for the art, well, there is a reason Marvel hired on Bendis as a writer. Don’t get me wrong, it’s very capable, and he knows what his strong suits are. No one lays out panels and pages like Bendis does. He’s not afraid of negative space, jam packed pages, repeating panels, or unusual looking double page spreads. And he uses old photos wonderfully as backgrounds. Gives the story a nice, authentic feel. It could also be that he just didn’t feel like drawing much beyond the characters. And while some characters look “cartoonish,” his art works, especially when rendered with a high black/white contrast. This book would have never worked in color.

I’ve heard rumors that Torso will soon be reprinted by Icon, Marvel’s creator owned boutique, and if that’s the case, I’ll probably double dip. A hardcover would be a nice addition to the bookshelf.  Now let's just get on David Fincher to make that Torso film that he's been toying around with for years.
Posted by Dan Fleming at 10:51 AM