Friday Night at the Movies Week 32 - The Mark of Cain 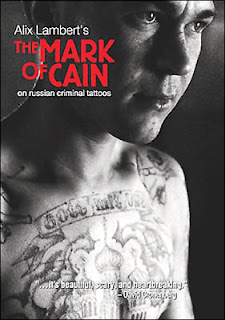 The first time I heard the word "gulag" as a young child it frightened me.  I didn't know what it was or what it meant, but something about the word gave me the creeps.  Thinking back, I'm not even sure how I came across it.  Probably reading a book or watching a movie I wasn't supposed to.  By the time I learned of it's meaning, it only scared me worse.  Prisons were not something I wanted to become overly familiar with, but the sound of a Russian Prison nearly made me wet myself.  Keep in mind, I grew up in the 80's, and everything Russian, with the exception of Ivan Drago, was bad.  So Russian + Prison = terrified ten year old.

As I grew older, I became strangely obsessed with prisons.  Again, not somewhere I ever plan to go, but the dynamics of prison life fascinates me.  The show OZ was a gift from heaven for me.  I could see prison life, albeit highly fictionalized, from the comfort of my own home.  Along with it, there are countless television shows on cable that document prison life in America.

Then came the movie Eastern Promises.  Suddenly, the thought of Russians gulag's crept back into my consciousness.  And while Viggo Mortensen oozed badass charm, it was his tattoos that stole the movie.

I love tattoos.  I got my first one when I was twenty, and  have been adding to them ever since.  I've got one arm nearly covered, and if my personal wealth would ever come in line with my imagination, I would acquire many more.  And they are all personal to me.  I took my time choosing them, making  sure each one had meaning.  It drives me fucking crazy to see people with generic tattoos.  Those posters on the walls of tattoo shops with tribal designs and panthers and whatever else is on them, need to be abolished.  I cannot comprehend picking out a design that countless other people have.  Might as well tattoo a barcode on me.

Russian prisoners seem to agree with me.

While the documentary, Alix Lambert's The Mark of Cain, doesn't just dwell on the ink of Russian prisoners, it does explain how and why they may choose to get them.

Russian prisons, like I once thought, are not nice places.  There is rampant overcrowding, terrible air quality, and awful food.  Combine these three conditions and wait for skin diseases and tuberculosis to break out.  Yet even in this squalor, the inmates still ink themselves.  For them, it's not to "look cool" or "edgy," and it's certainly not a way to rebel against the middle class upbringing.  It's a badge of honor, and one not achieved lightly.

Tattoos are the stories of who they are and how they got to be there.  Images on their skin can mean anything from the crime they've done, to the time they've served, to even what they like.  And they are not to be taken lightly.  In the system, there are castes, and you do not get a tattoo that you do not deserve.  Tempt the powers that be, The Thieves-in-the-Law, and you could find yourself getting punished in some terrible ways.

As informative as it was, I certainly wanted a little more from The Mark of Cain.  It's only 75 minutes long, and with all the inmate and expert interviews, it could have benefitted from an expanded running time.  I would have loved to have seen more specific stories about certain tattoos, or gotten an expanded look into the prison hierarchy.

But as an introduction, it's worth your time.

And it's nice to hear that when researching for Eastern Promises, Viggo, Cronenberg, and writer Steven Knight were inspired to make changes to the script based on the knowledge they got from this film.