When it comes to crime related, non-fiction, comic books and graphic novels, the pickings are pretty slim.  Most non-fiction comics are auto-biographical.  Those can be found everywhere, from Harvey Pekar's exploration of the mundane in American Splendor, to the frightening war-torn reporting of Joe Sacco in Palestine, Safe Area Gorazde, and War's End, to the heartbreaking tales of the Holocaust in Art Spiegelman's Maus.  But most author's aren't brave/stupid enough to write about their true criminal exploits.

Except for Ed Brubaker.

Wait.  What?  The guy who has written Captain America, Batman, Daredevil and the X-Men?  That guy?

Yes.  That guy. It seems before he became a top tier creator for the Big Two, whe was, in fact, A Complete Lowlife. 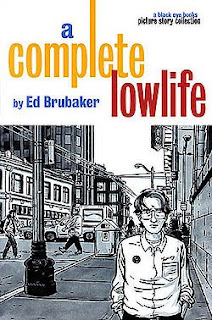 I'm sure sure names, places, and possibly plots have been fictionalized, but if each story has a grain of truth, than Mr. Brubaker has more in common with his Criminal characters than is comfortable.

I'd actually label him, or the past him, a bit of a scumbag.

There are fights, drug abuse, theft, and armed robbery.  He had himself a career in his younger days.

But what's more surprising than Ed's level of degradation, is his skills as a cartoonist.  Ed didn't just write A Complete Lowlife, he also drew it.  And while he will never draw the next big crossover, he is an able story-teller.  I know it's time consuming, and he has found considerable success as a writer, but I'd love to see him pick the pencil up again.

Now I need your help, yet again.  I've got two more books I can read for future weeks, but like today's book, I've already read them.  Both Torso by Brian Michael Bendis and Capote In Kansas by Ande Parks and Chris Samnee are excellent books, and I'd gladly open them again, but it would be nice to read something new.  Only I'm at a loss.  Suggest to me something new.
Posted by Dan Fleming at 5:38 PM