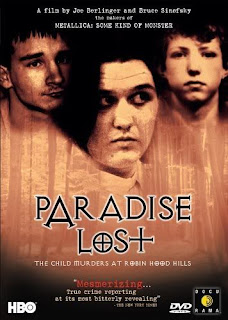 I've long been told this documentary, Paradise Lost, is just "one of those movies you have to watch."  Usually, when I hear something like that, I do just the opposite.  It's the petulant teenager in me surfacing every once in a while.  It probably stems from the years I worked at a video store where everyone told me I just had to see The Waterboy or Practical Magic or some other piece of shit movie that I couldn't possibly enjoy.  Usually, I'd recommend some movie right back they would consider unwatchable, usually foreign.  Damn, my customers hated to "read movies."

But something about this film kept coming back into my consciousness.

Was it the small town setting?  Growing up in East Bumfuck Maine, I certainly know what that's like.  The Heavy Metal/devil worship?  Another possibility.  As a teen, I grew up listening to Metallica and other bands that seemed very objectionable to my mother.  I remember receiving Guns & Roses Appetite for Destruction from my Grandmother for Christmas,  and trying desperately to hide the inner artwork from her.  She might not have been so keen on the robotic rape pictured inside the liner notes.

Most likely I decided to watch this film because I knew some guys like those accused of the murders.  One such guy was often whispered about in the back of the schoolbus.  "He's a devil worshipper!"  "He's killed animals!"  Etc. No one ever had any proof of these outlandish claims, but 13-year-olds rarely need evidence to convict.  Looking at the guy I know now, that seems impossible, but at the time, the mention of his name was enough to give you the creeps.  It didn't hurt that he was a few years older than me, therefore, unknown and more frightening.  Upper classman!  The horror!

I've got no idea if these childhood tales ever made it to the ears of local adults.  Perhaps they were just confined to buses and playgrounds, but I'm willing to bet if there had ever been a murder, much less a triple murder, fingers would have been pointed in his general direction.

While I will never claim to be an expert on documentaries, I can tell you this film was amazing.  There was a strong narrative throughout, and every side to the story was presented fairly.  The filmmakers themselves (I'm looking at you Academy Award Winner Michael Moore, not victim Michael Moore) did not make the film about themselves or their opinions.  They allowed those involved to tell the story in their own words.  Mingled throughout were newsreports, support groups, court footage and actual crime scene footage.

I did not expect to see the bodies of two of the dead children within the opening minutes, but it made me aware that this would be an unflinching look at the horrible crimes committed.  Everyones pain pours out of the screen, and it's tough to seperate their sense of loss from the facts presented.

Would my community have reacted this way?  Would any community today react this way?  It would be far too easy to label so many involved as uneducated.  The one boy who confessed to involvement, Jessie Misskelley, had an IQ of 72, barely above the mental retardation guidelines.  Listening to others, it's not hard to estimate their intelligence level.  Their testimonials are filled with rage and hate, and it's hard to remember that they are in pain and want someone to pay.  But does any of this change what really happened?

This film raises so many questions, and challenges you to think about them, putting aside any biases you may have.  It was a hard for me to watch for that very reason.  Everytime someone opened their mouth, all I could think was "violence obsessed, ignorant, bible-thumping redneck," and that's not limited to just the victims families.  I had a hard time listening to the "educated" police, expert witnesses, and prosecutors, desperate for a conviction.  And frankly, I didn't feel like a good person while watching it.  If this was my own child murders, I could possibly act just as they did.

Did justice prevail?  I've got my own opinions on the case after watching this film, as I'm sure everyone does.  It's hard not to be moved and influenced by such work.  But I'm not going to give anything away, even my opinion about the verdicts, as I think it's important to view Paradise Lost like a potential jury member, without preconceived ideas and prejudices.

There is a follow-up film, Paradise Lost 2, and that is next on the viewing list, once I emotionally recover from this.

It will take a day or two to feel human again.

For more up to date on this still ongoing case, please check out http://freewestmemphis3.org/
Posted by Dan Fleming at 11:04 AM