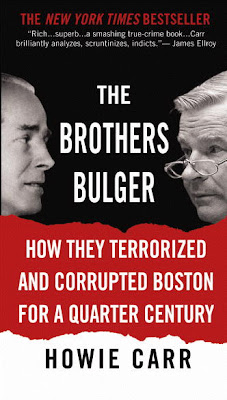 "I do still live in the hope that the worst of the charges against him will prove groundless," Billy Bulger read.  "It is my hope."

It was December 23, 1994, the day that Whitey Bulger vanished.  He had always assumed that it would come to this, so in 1977 he had begun constructing a new identity for himself.  The most powerful organized crime figure in New England was about to turn into "Thomas F. Baxter."

When I learned about civics in high school, I realized they told me how things are suppossed to work, not the way it's really done.  My teacher told me that if you have a problem with criminals, you go to the police.  They will serve and protect you.  If you've got a problem with how they have to do their jobs, you go to your Congressman/woman.  It's a fantastic system that our founding fathers built.  When each citizen does his/her job, it forms a chain that cannot be broken.  But you know what they say about weak links.

What if each and every single link in that chain is a corrupt son of a bitch, mixed unequally with one part upstanding honest citizen and nine parts hoodlum?

I've seen The Godfather.  I'm well aware that politicians use gangsters for the dirty work and the gangsters used their money to keep elected officials in their pocket.  The scene with the Utah Senator, covered in blood next to a dead prostitute at a Corleone hotel always stayed with me.  Lie down with dogs, and you get framed for a whore's murder.

We expect the criminals to be "the bad guys," but what happens when that line between law/lawlessness is viewed through beer goggles?

Case in point, the Bulger Brothers.

I lived in Boston in 1994, and I remember reading about Beloved Public Figure, Billy Bulger.  At the time, I knew nothing of him or his past.  I didn't even really pay attention to the headlines.  Another potentially corrupt politician,  not exactly Earth shattering news.  Then I heard about his brother Whitey.  While many politicians have black sheep family members they try to ignore, it's not often that sibling is a hard case criminal.  It's a story straight out of the pulps or Hollywood.  Two brothers, one a cold blooded killer, the other President of the Massachusetts Senate.

How does this happen?

Howie Carr's book, The Brothers Bulger, does a wonderful job exposing the labyrinth of deceit that became the lives of these two brothers from Southie.  It's an effective biography that offers detail up detail, especially when it comes to building a criminal dynasty, regardless of which side of the law you fall upon.

First order of business, get yourself some cronies.  Whether through political connections or intimidation, it's important that people owe you favors.  They will need to be called upon in time of need when you need a man murdered or a vote to go your way.  Give those who support you, and their families, important, well paid jobs.  Promote them when possible.  Build a pyramid scheme in the legislature, committees, or street corners.  Make sure they all kick up to you.

Secondly, get the dirt on everyone.  They may be your friend now, but you want to make sure they won't turn on you when it starts to go bad.

Third, if they do flip, be ready to silence them.  It could be a bullet in the back of the head, or having them voted out of office.  It doesn't matter, as long as they are out of your way.

Lastly, be prepared to sell everyone out if it saves your ass.

It amazed me just how powerful these two men were.  For the longest time, they both held their respective peers (using that term loosely) in their iron grip.  Everyone feared them, especially Whitey.

He wanted your business, he'd take it.  You resisted, he'd kill you or your family.  Those working for him were as cold as it got.  Nothing got in their way.  Not La Cosa Nostra, not rival Southie gangs, not even the feds.

Oh yeah, the FBI.  Just to make your patriotic heart beat a little faster, let it be know that they were just as crooked as everyone else.  So many agents were on the Bulgers payroll, in some form or another.  Even Whitey and his top man were INFORMANTS!  Try to picture Tony Soprano rolling over on his guys.  But that's what Whitey did.

The most worrisome detail in the whole book  was that this high level of corruption went on for decades, and they all got rich.

I take that back.  That's the second biggest problem.  Despite all the corruption eventually seeing the light of day, with numerous convictions and jail sentences, the two men at the top remain free.  Whitey is still on the run, featured on America's Most Wanted just last week.  And Billy, he's got himself a cushy retirement, living of a pension that would drop your jaw.  Despite all their enemies, there are still those that allowed them to fall gracefully.

It's heartbreaking and maddening to see the system fail the citizens of The Commenwealth so completely.

Late in court, Kevin Weeks was asked how such an incredible situation could be so utterly ignored, or covered up, in America.
"We weren't in American," Weeks replied.  "We were in Boston."
Posted by Dan Fleming at 11:06 AM