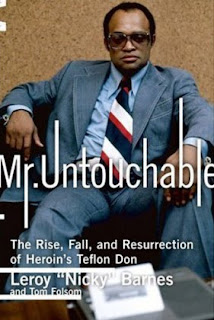 I can only compare it to watching an endless amount of the Old Spice Guy commercials and not realizing they are meant to be funny.  Not even the Dos Equis guy is this cool.  And it could be possible to forgive the ego trip if the writing was engaging, or interesting, or even passable, but it's Showgirls level bad.  The fact that I read it to completion should look favorable to me should I ever meet Saint Peter.

"Well, you were a bit of a bastard, but you did read Nicky Barnes book."

And I was anxious to read this!  Cuba Gooding Jr., who portrayed Barnes in American Gangster, was more interesting in his five minutes of screen time than the actual man in three hundred pages.  For a man who apparently did everything, sold the best drugs, lived in the best places, fucked the hottest women, drove the fastest cars, he's incredibly dull.  How does that happen?  Remember back to high school or middle school, when one of your friends was the first in your gang to get a blow job?  Remember how he talked about it so much that you went from envying his luck with the ladies and eventually hoped he caught syphilis?  That's how this book made me feel.  I was cheering for the police to get him.

So instead of reviewing this book any further, I'm going to leave you with selected quotes.  I'm not even cherry picking the worst of the worst.   The whole book consists of this.

"Besides, you need your men making drops, dealing powder and takin' out mothafuckas who need killling.  Puttin' shit in bags seems like something a woman should be doin' anyhow."

"And that was that.  No more words on the situation.  We may have been equals, but my decisions were not subject to discussion."

"I was all decked out for the grand opening of Jegazzy's in my new fit from Brioni.  At least I'd be the best dressed dude on the run!"

"They want you to say 'Oh, I'm an asshole, please forgive me,' and that's the role I took.  But that made it worse, turning me into an elusive celebrity like Greta Garbo or my man Howard Hughes."

" 'Don't fuck me so hard!' yelled the go-go girl, but she was just playin'. She loved to deep fuck."

"And while it wasn't a big deal to see a Benz in a high-crime neighborhood by now- everybody caught onto my trend, and believe it, I was the first to be doin' that- the cops decided to tail us."

"But I despised that woman for bringing Stan down.  Underneath her suburban clothes, she was just a hustlin' lady, a street person like her mother.  I saw that long ago- that's why I dumped her in the first place."

"True, I'd beat the rap time and again, but what Jimmy's not realizing is I'd been framed on those cases.  That's the real problem with the justice system.  Tryin' to fuck me over!  And I hate to break it to the President, but he ain't the judicial system!  That's not his job.  That's why we got separation of powers!"

'Everything in prison moves in cliques.  My clique was the New York and DC dealers, mostly black.  People knew me and took good care of me, so I quickly became their ringleader.  In the joint I had an invincible reputation."

" 'We may not look upon him ever again,' wrote Kempton, 'and it will be a long time before we look upon his like.  Nicky Barnes is a great men, and to say that is not to dispute Acton's conclusion that all great men are bad men.' "

Should you be inclined to learn more about Nicky Barnes, do yourself a favor and watch the documentary, Mr. Untouchable.  It's entertaining, engaging, and most importantly, not told entirely from Barnes' point of view.  It's available for instant viewing on Netflix and on DVD.