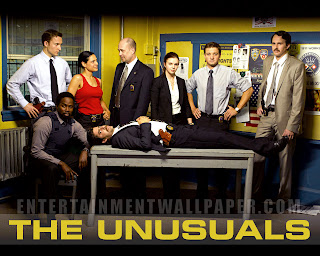 After a few years, I'm finally getting around to watching the Unusuals.  It aired a few years ago on ABC, but had the misfortune of airing immediately after Lost, and if you are anything like me, the last thing you want to do is watch another show.  Me, I'd be too busy having my brain melt to enjoy anything else.

But thanks to the magic of Netflix, I'm able to watch the show now despite it not being released on  DVD.  That surprises me.  Just about everything is released on disc now, whether it deserves it or not.  Jersey Shore is released, but not this?  What the hell is ABC thinking?

They are probably embarrassed they cancelled the show.

I've only watched two episodes, but it's easy to recognize this show was worth watching.

For starters, the great cast.   Jeremy Renner (Oscar nominee for The Hurt Locker) is, so far, the lead character.  He plays Detective Jason Walsh, a former pro ball player turned cop whose partner is killed at the beginning of the episode.  He doesn't always play by the rules, owns a diner, but is a good cop.  His new partner, Detective Casey Shraeger (Amber Tamblyn) has just transferred over from vice where she's been spending her nights dressed as a hooker.  She's our POV for the station, as she is introduced to everything just as we are.  She's not the typical NYPD, as she happens to be rather rich, but is hiding it.  Her Sarge knows, and that's exactly why she's put on the squad.  His "house is in disarray" and it's hard to bribe someone who doesn't need money.  While she could be the typical wide-eyed rookie, she's actually pretty strong.  She's playing well of Renner, and their partnership is thankfully free of any "will they or won't they" tension.

Joining those two are another pair of Detectives, Banks and Delahoy, played by Lost's Harold Perrineau and Adam Goldberg.  I've got great affinity for these two actors, and they instantly won me over by using the old photocopier/lie detector test made famous by Homicide.  So far, it seems these two get stuck with the strange cases, hence giving the show it's name.  Their handling of a cat murder in the pilot was well worth the time.  Oh yeah, Goldberg's Delahoy also has a brain tumor and not long to live.  Not that he's telling anybody.

Rounding out the cast is Terry Kinney, well known to me as Tim McManus from Oz.  I hadn't seen him in a while, and wasn't surprised to see he's just as good as I remembered.  The rest I'm not so familiar with, but they are holding their own.

I'll hold out complete judgement until I've watched the entire show, but I'm sure ABC made one hell of a mistake.  The show is amusing, interesting, and full of cop tradition, including one I'd never heard of.  Apparently, cop badges are past down upon retirement.  In the case of an officer being killed in the line of duty, the badge is retired, never to be worn again.  Not sure if this is fact, but if so, it's pretty moving.

Hopefully the show will keep teaching me a few more tricks.