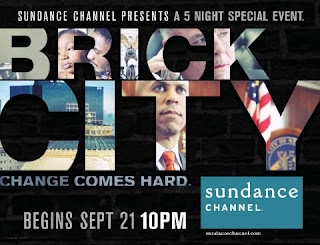 I've only seen the first of five episodes, but the Sundance channel's Brick City appears to be an excellent documentary, that looks at the different facets of a crime ridden city, much in the way that HBO's The Wire did.  It's not as good, but it's real, and deserves to be watched.

Brick City starts in the spring of 2008.  Recently elected Mayor, Cory Booker, is an enthusiastic, young, and determined politician.  He's a product of Newark, New Jersey (Brick City) and he feels it's his mission to help clean this city up.  I've heard that talk from plenty of politicians, but Booker seems genuine.

He's also got some good help.  His Director of Police, Garry McCarthy, once held a similar position in their neighbor across the water, New York City.  He knows he's inherited a mess of an agency, but is confident he can turn it around.

Along with these two public servants, the cameras also follow along the most important piece of the puzzle, the public.  Among it's targets are Jayden & Creep, two young parents, and parents to be, who also happen to be a Crip and a Blood.  They've lived the life, and now they want to live better.  We also meet the Street
Warriors, who appear to mostly be middle aged men.  Far from being a gang, they set out to help improve the community any way they can.

So far, that's the theme of the first episode, Improvement.  We see the Mayor interacting with everyone he can, taking in interest in who they are and what he can do to make their life better.  He realizes that to save the city, he needs to start with the children that might grow up to continue the already prevalent drug culture.  The importance of community programs is not lost on him, and it's nice to see him showing up at midnight basketball games to challenge the kids to "beat the mayor for money."

He manages to get everyone on board with Operation Impact, a citywide project to lower the murder and violent crime rate over the summer, the period when it's usually at it's apex.  It's a noble goal, and one that will be hard to meet.  The very night of his first midnight basketball game, a ten year old is shot.  Booker goes to the scene, along with his police director, and talks with those who will listen.

And Booker is one hell of a public speaker.  Much of the episode has him in front of an audience, whether it's engaging the City-Wide Legal Internship Program in a debate over newly installed deterrent cameras, motivating the recent graduating class of police cadets, or just chatting up a kid in the elevator about the 77 Yankees.    The man can inspire, and it's easy to see why his approval rating was so high (71%) at the time of filming.

The first episode left me feeling pretty good, that maybe this man can make a difference, but the cynic in me is thinking I will see the worst in the next few episodes.  Either way, as soon as I'm done watching, I'm going to see how he's doing today.

Brick City is available as a 3 disc DVD set or, if you're like me, you can instantly watch it on Netflix.