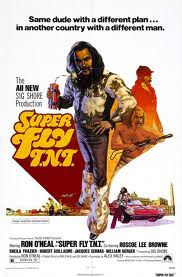 Sometimes sequels are just a terrible, terrible idea.  Pretty much everything I adored about the first movie, including the AMAZING music, is missing from this film.  It's hard to fault leading man/director Ron O'Neal for trying to capitalize on the success of Super Fly and attempting a "message" movie, but using Priest instead of a brand new character might have been a bad idea. (Interesting side note- this film was co-writen by Alex Haley of Roots fame)  It had some high minded ideals, a retired, reformed Priest aiding African rebels, but all of this was undercut by inability to remain awake.  Super Fly TNT committed the greatest sin of an exploitation film.  It was boring.