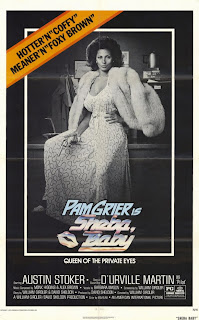 Even when rated PG, Pam Grier can still kick some...butt.  If she can go PG, I can try as well.  Writer/director William Girdler should be given credit for trying to take the excessive sleaze, violence and sex out of a genre that is well known for it, but did he succeed in making a good film?

Sheba Shayne, a Chicago PI, is back in her hometown of Louisville KY to help her father, a loan officer, who is getting shaken down by some thugs.  He thinks everything is under control, but soon he is as dead as can be.  This doesn't sit well with Sheba, so she teams up with ex-flame Brick (Austin Stoker) to seek retribution.

Sheba Baby is exactly what I expected, and that's not a good thing.  Coming off of Black Mama, White Mama, it was good to get some plot with my Pam, but this movie just felt sanitized from the get-go.  The script was rather by the numbers, the acting especially weak, and the direction was nothing to point out.  Awkward would be the word I use most to describe Sheba Baby.

I'm sure Ms. Grier relished the chance to act with her top on, I just wish she had chosen a better movie.  This would have made a very solid television pilot, but as a film it just needed more everything.