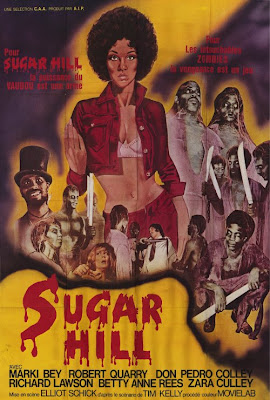 Langston (Larry D Johnson) has it going pretty well.  He's got a successful nightclub, Club Haiti, and a foxy woman on his arm.  So when a local gangster sends his right hand man, Fabulous (Charles Robinson), and a couple of token white thugs to "buy" the club, you think he'd at least consider it.  Unfortunately for him, he's not afraid and lets his mouth write some checks his ass can't cash.  After business hours, Fabulous and his boys literally kick him to death in the parking lot.

Langston's woman, Diana "Sugar" Hill (Marki Bey), isn't going to take his death lightly.  Were this any other film, perhaps a Pam Grier one, she'd get a gun and go kill those honky bastards.  But give credit to screenwriter Tim Kelly and director Paul Maslansky, this isn't a typical revenge flick.

Sugar just happens to know the local voodoo woman, Mama Maitresse (Zara Cully aka Mama Jefferson!), and together they are going to summon a Big Bad Voodoo Daddy, Baron Samedi (Don Pedro Colley)!  Instead of firearms, Sugar is going to get her revenge with silver-eyed, cobweb-covered, slave-shackled ZOMBIES!

How could anyone not love this movie?

From it's opening theme song (Supernatural Voodoo Woman by the originals) to it's final moment, Sugar Hill relishes in its absurdity.  Anyone taking this film seriously is going to be vastly disappointed, but after watching a chicken foot attack, how can anyone "take it seriously?"  Sugar gets herself a sexy jumpsuit and afro, and with them, an army of the undead to control.  This is not an Academy Award winning premise.  But the deaths are creative and fun, and most of the actors seem to be having a blast, especially the way over the top Don Pedro Colley.

I found Sugar Hill to be a welcome divergence from the usual revenge formula.

"I give you your revenge!  Put them to evil use.  It's all they know or want."  -Baron Samedi