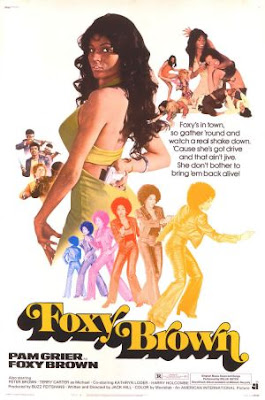 Foxy Brown is out for revenge.  When her boyfriend, undercover cop Michael Anderson, is murdered by mobsters, she takes it upon herself to see that justice is served.   It's a simple plot, but a fantastic movie.

You know a film doesn't have much for a budget when the main villains drive around in a station wagon.  But what Foxy Brown lacks in money, it more than makes up for it in attitude.  And if anything can get the taste of Bucktown out of my mouth, it's a lesbian bar brawl.

Foxy Brown is a film that has it all.  From the shuck and jive hustling of her brother Link (Antonio Fargas), to the very progressive female crime boss Miss Katherine (Kathryn Loder) to drug smuggler Sid Haig, this movie is loaded with people who deserve to get their asses kicked by Pam Grier.  She'll take anybody on with her modest kung-fu skills, and if those are not enough to get the job done, she'll pull a gun from her afro.

Director/writer Jack Hill packed every second of this film with memorable scenes.  When Foxy goes "undercover" as a call girl, watch her emasculate and embarrass a "honkie" corrupt judge with a smile on her face.  Been kidnapped, drugged and held hostage in a deserted ranch?  Not a problem for Foxy.  She'll burn that place down.

Foxy Brown is all about revenge, and it's a joy to watch Pam Grier really get into this role, and out of her clothes.  She's got more nude scenes in just this movie than most modern day actresses do in their career.  Is it exploiting a young actress hungry for roles?  Possibly, but she doesn't really seem to mind.  And it did make her an icon.  Or perhaps she's just the strong, fearless actress needed for roles such as this.

Watch for the debate.  Stay for the plane crash.