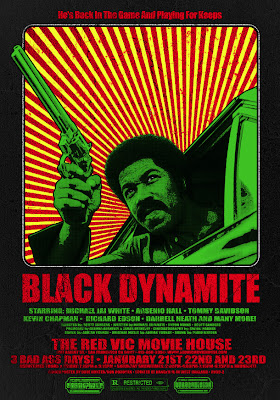 "Hit the sheets or hit the streets"
I grew up in a tiny central Maine town.  We're talking like a thousand people, with half as many livestock.  It's about as far away from the "street" as one can get.  I never had to worry about "the man" keeping me down.  My urban experiences were nil with the exception of cable television.  WGN out of Chicago, which I'm still not sure why my cable company carried that particular station, brought me Good Times, The Jeffersons, and most importantly Chicago Cubs baseball.
And every so often a movie would be broadcast, sometimes late Saturday nights, which would expand my "street" knowledge.  I didn't know the term blaxsploitation, but I knew these films were something special.  Made on the cheap, usually with bad actors and terrible effects, the centered around one man and his need to make things right.  And because I was a young man, I paid careful attention to the ladies he met along the way.
Black Dynamite made me feel like that kid again.

Raw with energy, kung fu, and yes, boobs, Black Dynamite spends the entire movie putting the moves on the ladies and making with the moves on any jive ass turkey who decides to test his skills.  It's outrageous, endlessly quotable, full of stock footage (I see you Missing in Action 2) and the most fun I've had watching a movie in quite some time.

Michael Jai White, an actor I've never really liked, is pitch perfect, flexing his muscles and kicking his way to a criminally underrated performance.  The writing is intentionally flawed, with the deliveries from all actors as mannered as possible.  Watch in delight as one such performer actually reads his directions as well as his dialogue.  Sure, they knew they were making an homage, but not once did they overplay it.  They were serious in their humor, if that makes sense.  And in an industry where pieces of shit like Epic Movie are considered "funny" its nice to see that a sly wink to the audience can succeed.  (Too bad it wasn't as financially as successful.)

So grab your 40oz of Anaconda Malt Liquor... or on second thought, don't.  You'll understand why.


poster designed and printed by Dave Hunter and Ron Donovan.
Posted by Dan Fleming at 10:18 AM