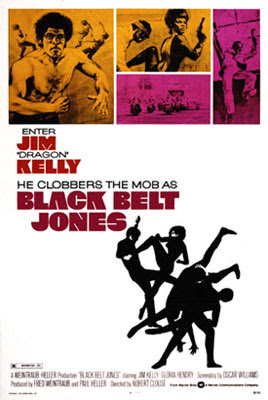 Nobody can kick ass and rock an Afro like Jim Kelly, and if you thought he got a chump death in Enter the Dragon, than you need to watch Black Belt Jones.  He will kick, punch, and yes, make some weird ass noises, as he takes it to the mob.

Don Steffano is a powerful man.  He's got money, power, politicians and drug dealers in his pocket.  So when he says he needs the land that is currently occupied by the Black Byrd karate studio, you can bet his men will do anything they can to obtain it.

His drug dealing partner Pinky (Malik Carter) just happens to know Pop Byrd's (Scatman Crothers) weakness.  He's got a gambling problem, and the $1000 he owes soon becomes $11,000.  When Pop won't pay, they rough him up, and unfortunately kill him.  An extra pencil stroke turns that debt to $41,000.

However, when Pop died, the studio went to his long estranged daughter, Sydney (Gloria Hendry).  Instead of a pushover, they find out the hard way that she can take care of herself because, you see, she too knows Kung-Fu!

Being the mob, they still are not going to take no for an answer.  They kidnap Quincy, a star pupil, and Black Belt Jones (Kelly) finally gets more involved.

What follows can only be described as near non-stop martial arts action.  BBJ and Sydney, plus a few female acrobats, rip off the mob by infiltrating their winery (huh?) and stealing some pictures (what?) along with $250,000.  They set up Pinky.  More fighting.

I swear, you will never see more mustache clad men get their ass kicked then in this movie.

Yes, yes, and yes.  And along they way he will fight in the worlds largest bubble bath.