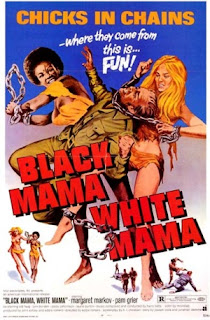 Remember back about twenty-four hours, when I mentioned that perhaps Foxy Brown was the tiniest bit exploitive in the number of times it made Pam Grier take off her clothes?  I now formally apologize to that film.  Compared with today's feature, Black Mama White Mama, it was absolutely wholesome. BMWM only takes 5 minutes to get to a group shower scene, and doesn't stop there.

Pam Grier and Margaret Markov are the "mamas" in question, and they are on the run from the law.  One is a former prostitute, the other a revolutionary, but both dislike the other.  Chained together by a lesbian prison warden (I'm sure this happens all the time), they are forced to act as one in order to survive once they escape.

Who would have thought The Defiant Ones would lead to this?  Jonathan Demme, that's who.  The man behind Silence of the Lambs, Philadelphia, and Something Wild is co-credited with the story, one of three women in prison films he had a hand in.

But don't let his future Oscar fool you into thinking this movie is anything more than a chance to watch beautiful women get naked, fight, and shoot guns.  Black Mama, White Mama is mildly entertaining, but not exactly good.  Pam Grier is great, as always, and Margaret Markov holds her own, despite my disbelief of a blond haired beauty queen being a South American revolutionary.  But hey, the do get to dress up as nuns.  The plot plods along, with tons of exposition as to why these two females are so coveted,(hint, it always involves money), and plenty of narrow escapes.  But just when I was about to get bored, the movie was given a nice dose of Sid Haig and his manic, wild-eyed acting.

You might want to watch this film once, but I doubt it will offer much on repeat viewings.