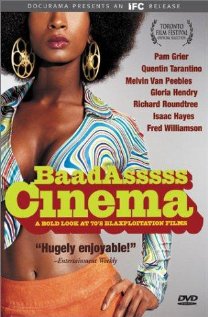 If you are going to study any subject, it's best to start with an introductory course.

First up on my list was director Isaac Julien's documentary, Baadasssss Cinema.    For those just starting to explore the blaxspoitation genre, this is a pretty good place to start.   There are interviews with actors such as Samuel L Jackson, Fred Williamson, Gloria Hendry, Pam Grier, as well as directors like Larry Cohen, Gordon Parks, and the motor mouthed Quentin Tarantino.  To balance out the creative side, Julien also interviews critics (Elvis Mitchell, Armond White) a historian (Ed Guererro) and even Tupac Shakur's mom (Afeni Shakur).

He also takes you step by step through the creation of the genre, with Melvin Van Peebles Sweet Sweetbacks Baadassss Song through to Tarantino's Jackie Brown, which brought Pam Grier back into the spotlight.  There are clips from numerous genre classics, including Shaft, Foxy Brown, Super Fly etc. etc. etc.

Where the film is strongest is in it's brief exploration of Pam Grier, and the importance of her films.  Because the documentary is only 55 minutes long, its not nearly as long as it should be, something that is unfortunate about this entire film.  I would have loved to see the length doubled.

I didn't learn anything new, but for any of you newbies out there, it wouldn't be a bad place to start.

However, if you don't have Netflix, or a local video store that carries this particular film, you can always check out what I've posted below.  Like Baadasssss Cinema, it doesn't go to far below the surface, but it's got Ice T in a pimp suit.  Enjoy.